The Bumpy Road To Software-Defined Infrastructure

At the Open Networking User Group conference, technology leaders discussed the challenges of shifting to a software-based environment.
Marcia Savage

As more organizations look towards software-defined infrastructure, they often share some common issues, such as a lack of vendor interoperability, the difficulties posed by corporate silos, and resistance to change.

Indeed, these were common themes at the Open Networking User Group spring conference, held this week in Mountain View, Calif. Executives and officials from large corporations and government agencies gathered to talk about opportunities, best practices, and challenges in moving away from a world dominated by hardware to one where software rules the day.

As networking hardware is becoming commoditized, features and functions are moving into a software-based model, which has its own challenges and needs to be more open, Nick Lippis, ONUG co-founder and co-chairman, said in his opening presentation. "We don't want to trade a closed hardware world for a closed software world," he said, underscoring ONUG's mantra of advocating for open IT frameworks.

The Defense Information Systems Agency is highly motivated to shift towards more automated, software-based infrastructure to streamline its heterogeneous and high-maintenance network, said Major General Sarah Zabel, DISA vice director. DISA operates a massive network, providing IT infrastructure support for warfighters, from the president to the troops in the trenches.

"We suffer from vendor lock-in. We have too many devices," she told ONUG attendees. While she appreciates that vendors have their special sauce, Zabel said, "We need an area where vendors accept the fact we need a path away from their solution…We need less dependence on hardware and to be able to work with more software." 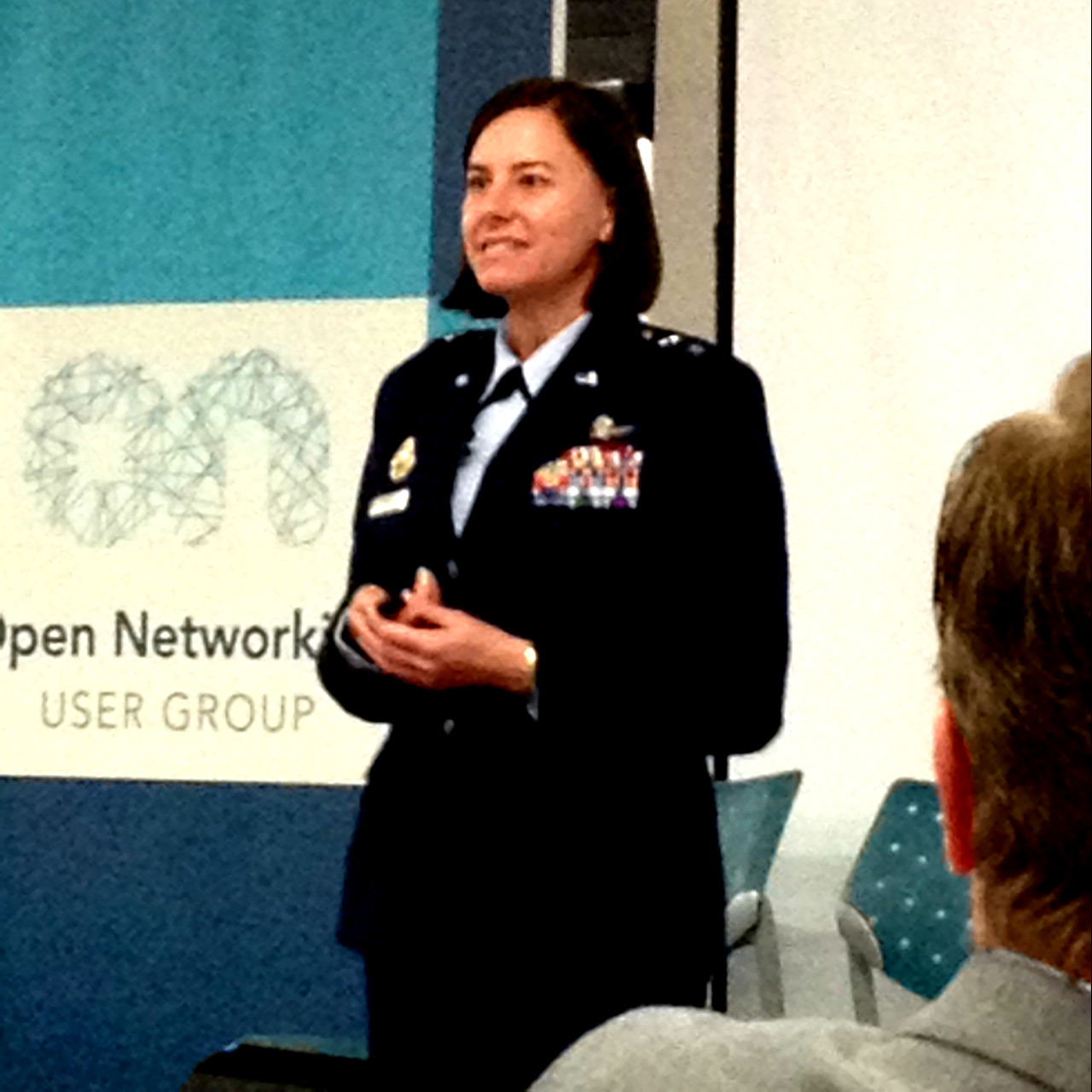 Zabel said she'd like to see vendors adhere more to open standards, which drew applause from the audience.

The agency faces other challenges in moving to a more automated and virtualized infrastructure, including garnering buy-in and trust from the warfighters it serves that the change will help them, she said. "They need a certain visibility into what we do. As we put more into software than hardware, we're leaving our warfighters behind to some degree …They want to see a wire, blinking lights, blinking in sequence," Zabel said.

Lengthy, complex business processes can stand in the way of taking advantage of technology innovations; manual processes need to be streamlined and improved, she said. We need to "not just virtualize and automate everything, but change the way we do business."

The need to update business processes in the journey towards software-defined infrastructure also was a topic at a panel on network automation strategies.

"When you're talking about infrastructure as code, we think about software only, but it's bigger than that. What about processes and culture? Doing things the same way -- that culture has to change," said Aryo Kresnadi, Technical Fellow for FedEx Enterprise Network Architecture.

James Younan, director of infrastructure research and development at UBS, said he's been in organizations that built innovative systems, but IT couldn't get corporate buy-in to change processes. "You have to get people to buy in, but a lot are reluctant to change," he said, noting that building support for a technology initiative is critical for success.

"You need to partner with your business and show them the value," Neal Secher, managing director and head of network architecture at BNY Mellon. "There's a snowball [effect] that will add value and allow you to add more automation. You need to prove through evidence that it works and won't hurt the business." 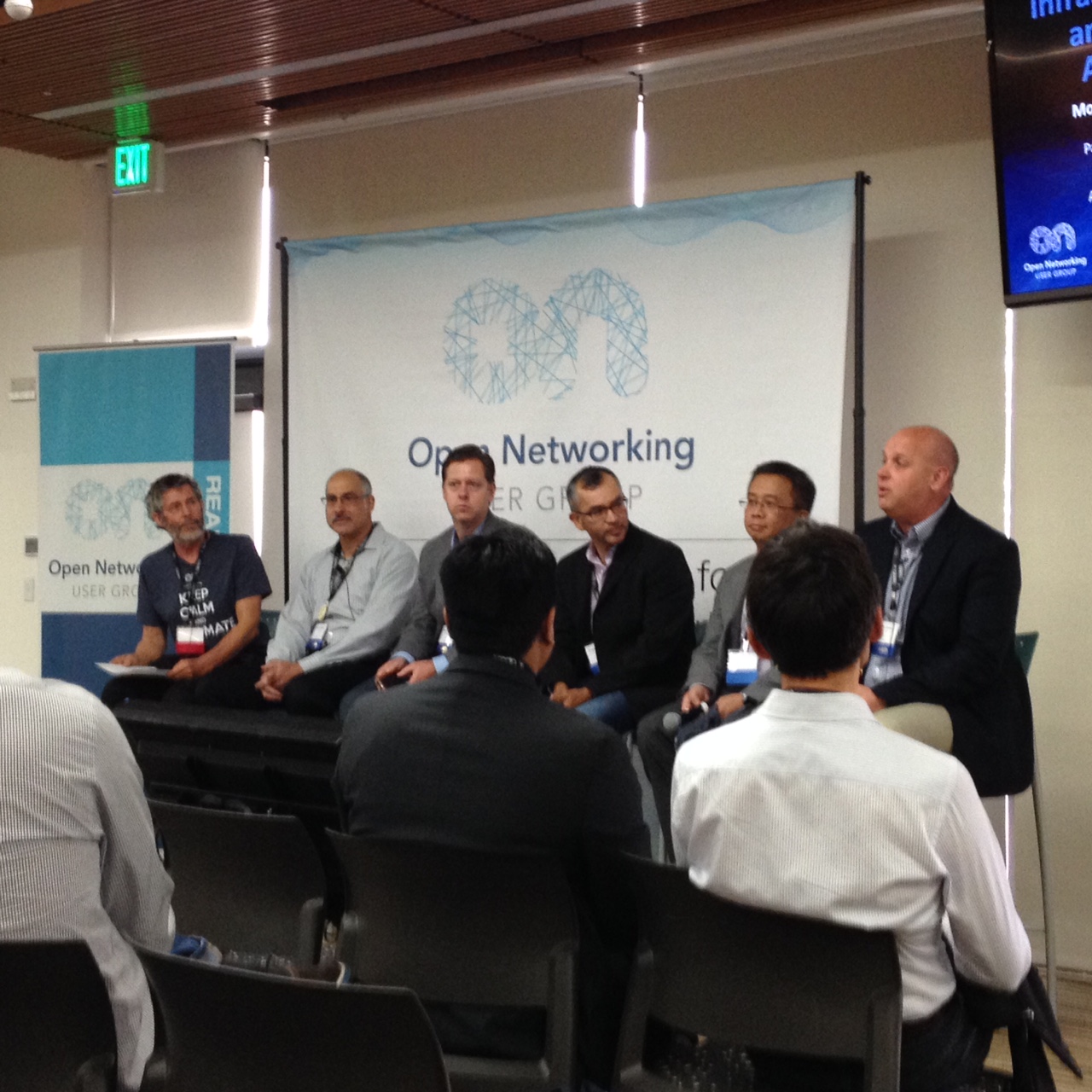 Panelists also discussed the traditional silos of networking, compute, and storage. GE is trying to tear down those boundaries, said Joe Ferrell, the company's leader and CTO of computing and data center infrastructure. "You can't have network teams worry about network pieces and Amazon teams worry about Amazon," he said.

Organizations have spent a lot of time siloing technology instead of treating it all as one system, Younan said. "We're finally coming around back to where people need to have a good understanding of how a system works," he said.

Pablo Espinoza, director of engineering at Intuit, said the company worked to bring together software developers and infrastructure experts and presented them with defined problems to solve. "There's a fundamental culture and mindset shift," he said.

The company has automated about 65% of its change volume. "It's happening. The challenges are around business processes," he said.

GE's Ferrell noted that his organization still plans to hire CCIEs, but is focused on hiring software developers who are recent college graduates.

Another panel provided an update on ONUG's software-defined WAN working group. After meeting for about six months, the group's unanimous consensus is that "SD-WAN, as it stands today, is pretty much proprietary to the vendors," said Conrad Menezes, senior VP of architecture and engineer at Bank of America. "All agreed that there was certainly enterprise lock-in from a hardware and software standpoint."

"I don't want to be locked into a vendor," said Snehal Patel, network architect at Gap Inc. "I need flexibility built into my connectivity."

ONUG on Tuesday announced an Open SD-WAN Exchange initiative to facilitate vendor interoperability. Menezes said the framework needs to be multi-vendor and the exchange point can be on premises or cloud based.

"I’m fine with proprietary solutions, but I'm looking for an open format, a way to integrate two different SD-WAN solutions," Mohideen said. "I'm looking for basic common features across the ecosystem of providers and for these to be available on the exchange."