Roam wireless stadium support staff will be lending a hand to Super Bowl fans that can't live without their connection.
Lee Badman

This Sunday, the Seattle Seahawks will battle the New England Patriots in Super Bowl XLIX at the University of Phoenix Stadium in Glendale, Ariz. While the players are on the field, a squad of technical support staff will be waging war on WiFi problems in the stands, on behalf of the 72,000 fans sharing selfies and gloating in their status updates. These "WiFi Coaches" have a unique role in stadium wireless performance, and I recently got the inside scoop from program managers at Extreme Networks.

Like many other businesses that provide public-facing WiFi, stadiums have a lot to contend with to keep their environments healthy. And like many of us in the WLAN business know, every problem feels like a wireless issue to the struggling WiFi user. These two points are at the core of the WiFi Coaches program, where trained staff help fans get connected, while also serving as guardians of the venue's reputation as a WiFi provider. Stadium wireless is becoming bigger business for professional sports, and reputation management is a shrewd idea given the huge dollars pumped into jumbo-capacity wireless environments.

The WiFi Coaches program is an initiative Extreme Networks uses in the stadiums where its infrastructure supports fan WiFi offerings. These stadiums include Gillette Stadium (where the WiFi Coach program started), as well the facilities used by the Cincinnatti Bengals, Seattle Seahawks, and Tennessee Titans.

The University of Phoenix Stadium is missing from that list, because it features Cisco WLAN infrastructure. But since Extreme Networks also provides the NFL with network analytics, the League asked for Extreme's WiFi coaches to participate in the big game, regardless of the hardware under the wireless hood. Again, this is big business -- it's not surprising that Extreme would get involved in fan-level support during the Super Bowl despite the competitor gear in use.

At least half of the 72,000 Super Bowl attendees are expected to fire up the stadium WLAN at some point. There will be 19 WiFi coaches on standby, each a certified graduate of a fairly rigorous training program Extreme developed to cultivate the right balance of WiFi knowledge, customer interaction skills, and thinking on your feet. 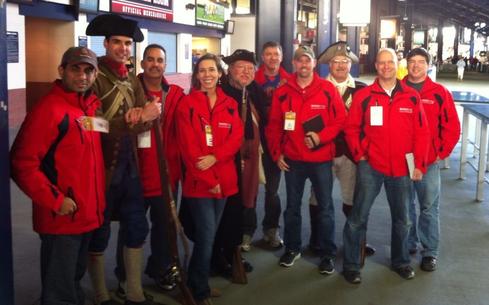 The Coaches try to help fans with initial onboarding as they arrive through the gates, and they wander the stands until 15 minutes prior to kickoff. They help with basic connectivity, downloading the stadium's app, and troubleshooting general problems, which they feed back to the stadium NOC.

During the game, the WiFi Coaches are stationed in the concourse, where they man a table and also provide a roving presence for those needing a hand. They cover sticky client issues, basic device problems, and application support as practical -- all while reminding users that the venue has excellent WiFi despite the individual client-related problems that might arise. The WiFi coaches do see a rapidly growing number of personal WiFi hotspots causing interference issues, but the NFL has yet to figure out how to approach these.

For fans that enjoy the NFL's mobile offerings, WiFi is important throughout the game. Others might use the network for the occasional photo or social media post at breaks in the action. Either way, the NFL is putting a high priority on the connected fan experience. WiFi Coaches function as the tip of the support spear, and I have to imagine that game day is wild, wonderful, and exhausting fun for those wearing the WiFi Coach jacket. It's a safe bet that other vendors and stadiums will emulate Extreme's WiFi Coach program as WLAN digs deeper into the fan experience at both the professional and college levels.