AirCheck WiFi Tester Gets More Than A Facelift

In the realm of enterprise wireless support tools, one handheld tester has absolutely dominated for many years. AirCheck, by Fluke Networks, has been the go-to field tool for wireless support and troubleshooting for business WiFi environments of all sizes since it was first announced back in 2010. Now, after what some see as an eternity in WLAN years, NetScout – which bought Fluke Networks -- has released a brand-new version of AirCheck with a new name.

One of the big changes with the G2 version of AirCheck is that it no longer sports the famous Fluke yellow and blue colors. However, the WLAN community will be happy that NetScout chose to continue the AirCheck line with the G2, and the new green and black tester exterior and carrying case are easy to get used to. Even before power up, the generous size of the G2 compared to the original AirCheck catches the eye as well. But there’s more to this piece of WLAN test equipment than just a change of appearance.

The G2’s biggest advantages are in its wireless capabilities, controls, and system management. While the first AirCheck topped out at 11n support, the G2 does 3x3 802.11ac to bring updated functionality for the fast-growing 11ac space. The new all touch-screen control configuration is extremely well laid out and easily operated with one hand. The tester powers up quite rapidly, and the screen has nice resolution and easy-on-the-eyes graphical elements. NetScout claims a 5-hour built-in battery life with G2, which helps during long days of troubleshooting or WLAN verification. 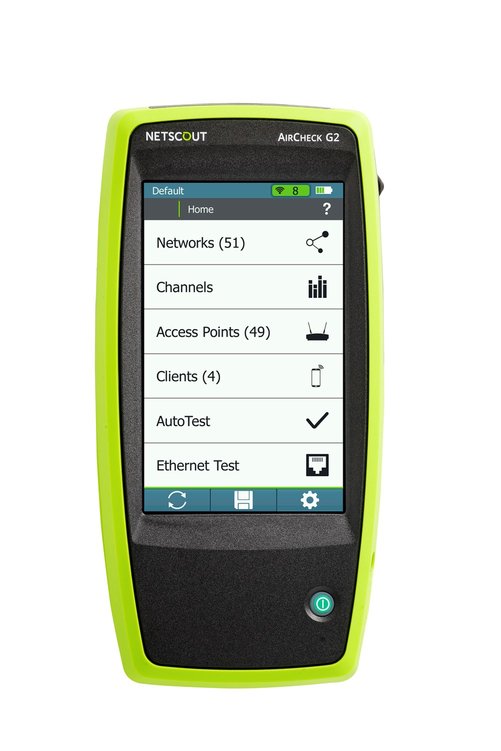 The types of tests that can be run on the G2 are largely the same as those on the original AirCheck.  When it comes to characterizing the health of the WLAN at the specific location where you are using the tester, the important fundamental aspects of WiFi haven’t significantly changed.  But the G2 delivers results faster and navigation is far more intuitive than it was for me on the original. Critical checks like AP and client scanning with all-important details about channel usage, 802.1X authentication, and even basic service assurance verification of core network services are still there, they are just performed faster through an improved interface.

Because wireless networks still need wires to function, the G2’s Gigabit port tests the Ethernet uplink and PoE to the AP, along with identifying switch name and port, and VLAN in use. It’s all very thorough, and those of us that know how to use the AirCheck will find that it’s often the only tool you need for the vast majority of WLAN support scenarios. My only beef is that the battery is enclosed, so spares and user replacement are not options.

As a network analyzer, the G2 takes the concept of test results storage and reporting to the cloud, using the same Link-Live Cloud Service that other Fluke Networks/NetScout tools – such as the LinkSprinter series -- utilize. I use LinkLive with my LinkSprinter, and uploads are automatic if you chose that option. It’s a great way to aggregate and report on multiple test sessions, and helpful for tracking changes over time for a given location.  You also can do automated email reports on stored tests.

Right now, there just isn’t a feature-for-feature equal to the AirCheck on the market, and the introduction of the G2 stretches the gap.