Even though it’s early days with software-defined networking, those that have tried it are impressed with the results, according to a report from Computer Economics.

The research firm polled 214 organizations worldwide on their experiences with 12 technologies and ranked them based on a risk-reward analysis. SDN beat out mobile applications, SaaS, CRM and other more established technologies as the top technology investment for 2016, according to the annual Computer Economics Technology Trends study.

The early adopters surveyed gave SDN the highest marks of any technology in the study for their experiences with its return on investment and total cost of ownership.

“This year, software-defined networking, while one of the most immature technologies in the study, exhibited outstanding customer experience,” the research firm said.

Rounding out the list of top five best technology investments after SDN are social business/collaboration products, mobile applications, Infrastructure-as-a-Service, and tablet computers, according to the study. All were classified as low-risk and high-reward in Computer Economics’ analysis. 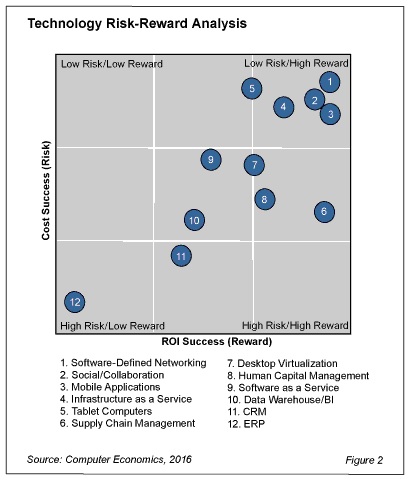 The analysis defines reward in terms of the number of survey respondents that broke even or reported positive ROI on their technology investment, which Computer Economics calls ROI success rate. Risk is evaluated based on the percentage of respondents that who came in or at less than budget for TCO, which the researchers call cost success.

In the survey, supply chain management, desktop virtualization, and human capital management came out as moderator risk/high reward. “With these technologies, cost is not always predictable and feature creep is common,” researchers said. “Nevertheless, investors are finding these solutions worth the risk.”

Meanwhile, CRM fell into the high risk/moderate reward category. “CRM plays a critical role in organizations, but implementation and maintenance costs can be difficult to predict,” researchers said.

Looking for more hot technology trends? Learn about the Future of Networking at a two-day summit presented by Packet Pushers at Interop Las Vegas, May 2-6. Don't miss out -- Register now!