Bandwidth Boom in the WAN

The way applications have been built and distributed around the cloud has fundamentally changed the way enterprises are connecting to the WAN. Some of the changes include a growing thirst for large amounts of bandwidth as technologies such as cloud, analytics, internet of things (IoT), and big data technology spread worldwide.

These topics are reinforced in some new data gathered by Aryaka Networks in the company's State of the WAN 2017 report, which gathered anonymous details about WAN traffic behavior from more than 5,000 network connection sites. Aryaka's report details an increase in demand for high-bandwidth WAN links (41 Mbps+), growth in the use of cloud applications, and a struggle to manage applications performance when end users are accessing applications in the cloud.

Aryaka, of course, has a vested interest in this kind of data as a provider of WAN optimization and SD-WAN services in the cloud. But the company's resource base of 5,000 network connection sites presents compelling data. (Disclosure: As an independent analyst, I helped Aryaka analyze some of the data).

First up: A mind-boggling increase in bandwidth. Data is exploding worldwide, driven by new bandwidth-intensive applications that include big data, cloud apps, IoT, and video. Other factors boosting the demand for bandwidth include the proliferation of mobile devices and near-ubiquitous connectivity via WiFi and mobile networks.

All of this is conspiring to fill up WAN pipes and drive more demand for connectivity. Enterprise WAN traffic grew by 155.7% in the Americas, 221.5% in EMEA, 165% in China, and 247% in APAC as a whole, according to the State of WAN report.  This traffic growth was experienced in many industries, with the software and internet sector leading the way (528% growth), followed by manufacturing (441%), and financial services (371%). All these industries are moving toward increased use of the cloud and data-intensive applications. In addition, the rise of real-time analytics processes such as IoT is likely contributing to increased WAN data consumption.

What’s the result of all this? Enterprises are scrambling to upgrade their bandwidth. As the chart below indicates, the trend in the Americas is indicative of what’s happening. The blue bars represent the distribution of WAN connections in 2015 by speed in Mbps. On the right, in green, is the distribution of speeds in 2016. 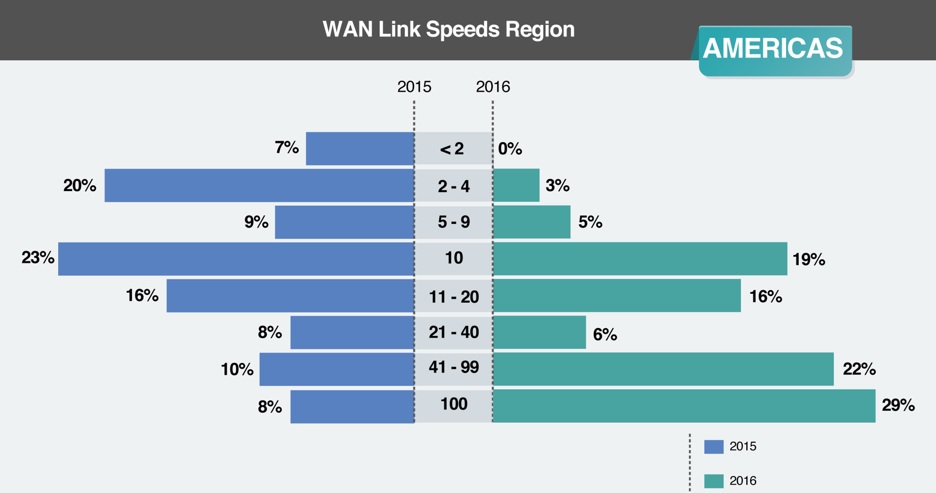 The chart from the Aryaka report demonstrates a skew toward faster connection speeds – 11 Mbps and above – as enterprises scrambled to upgrade their infrastructure to handle the demand for bandwidth. For example, 100 Mbps links represented only 8% of connections in 2015, but that jumped to 29% in 2016. And now more than 50% of all connection speeds are 21 Mbps and above.

Although the strongest infrastructure is in the Americas, this trend was clear throughout the world, with EMEA and APAC also showing strong growth in links. The boom continues in China, as that country keeps up with enormous growth by adding infrastructure. For example, the share of 100 Mbps connections grew from 5% in 2015 to 25% in China, according to Aryaka’s data. 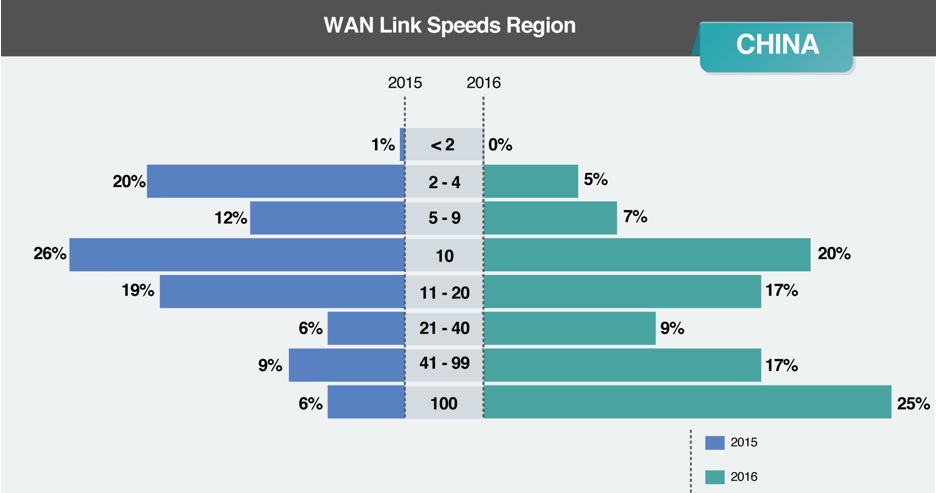 What’s happening with all this bandwidth? Drilling down deeper into this data, there are clear patterns in the use of the WAN. Traffic types are shifting, as enterprises move to HTTP/HTTPS (web protocols) as the primary applications mechanism. Use of legacy protocols such as CIFS and SMTP are falling, which indicates that enterprises are moving from inward-facing WAN platforms to cloud-facing platforms.

On the corporate front, applications protocols such as CIFS, SMTP, and MSSQL are falling. The reasons behind this should be clear -- corporate messaging, file-sharing, and database technologies are migrating to the cloud, many of which are now using HTTP and HTTPS as transmission protocols. Just think of how corporate files where shared 10 years ago, when CIFS and FTP were the norm, and what happens now, when it seems as if the whole world is using Dropbox, Box, Office365, or Google to share files and documents on a cloud service.

The State of the WAN report also includes detailed information about the performance of popular public Internet routes worldwide, as measured by the more than 5,000 sites that were measured. This data was extensive – and could be the topic of a different column – but I’ll summarize it by saying connectivity using the public internet around the world can be sporadic and unreliable, especially on long-distance routes stretching from North America to China or from Europe to the Middle East, for example.

The overall impression in reading the data from this report is that the WAN is changing remarkably fast. Not only is demand increasing rapidly, but the shift in the use of traffic protocols shows how large an impact the cloud is having on IT applications worldwide. This is causing network managers to rethink how to re-architect and design networks to help employees, partners, and customers access global cloud applications and resources, maintain applications performance, and keep networking costs within tight budget constraints of today’s IT world.