WLAN vendor is the first out of the gate with an access point supporting the 11 ac Wave 2 wireless standard.
Lee Badman

To date, the big guns of the WiFi world have been access points that deliver three streams of 802.11ac wireless connectivity. Pretty much every major WLAN vendor has its “flagship” AP of this construct, and impressive as they are, we’ve all been waiting for the magic day when 802.11 Wave 2 arrives. With its new ZoneFlex R710, Ruckus Wireless is declaring the Wave 2 party officially started.

As the first-to-market Wave 2 AP, Ruckus’ R710 provides the industry’s starting volley in what will certainly become an arms race of speeds and features as competitors play catch up. Wave 2 promises Multi-User MIMO (MU-MIMO), and the R710 brings it.  This is the first AP to be able to service up to three concurrent streams to different users in what was a one-user-at-a-time paradigm for client access in 11ac Wave 1 and the earlier 11n standard.

The R710 has a 4x4 radio configuration in both bands. While 11ac allows for 160 MHz wide channels in 5 GHz, Ruckus caps the AP at 80 MHz because of channel scarcity and lack of capable clients in a WLAN landscape that’s getting ever more complicated with several generations of clients in the mix.

Through Ruckus’ relationship as WiFi provider for with the city of San Jose, the R710 has been field tested to provide single-stream 11ac smartphones more than 200 Mbps, and  more than 445 Mbps speeds for two-stream laptops.  Ruckus claims that the R710 can go to 1,733 Mbps in 5 GHz (with 80 MHz channels and 256 QAM), and 800 Mbps in the 2.4 GHz spectrum, which is pretty astounding when you remember that we’re talking about wireless here. Other important specs include receive sensitivity to -104 dBm, support for up to 500 concurrent clients, and the ability to function in stand-alone or centrally managed modes. 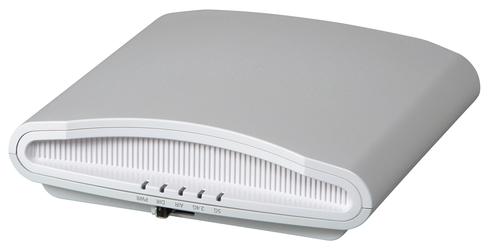 I asked Ruckus executives about the wired uplink requirements for an AP as fast as the R710. Though even at promised aggregate both-band speeds of over 2 Gbps, true requirements on the R710 or any Wave 2 AP will be bickered about well into the future. The R710 is Ruckus’ first access point to support dual 1 Gbps uplinks that can set up in a port channel, based on customers’ expected utilization.

The AP will run on legacy 802.3af Power over Ethernet in situations where switch upgrade costs are a concern, but when .3af is used instead of the more powerful .3at, there are trade-offs. For example, the 2.4 GHz radio is limited to 25 mW (which is still pretty generous), and the onboard USB slot and one of the 1 Gbps uplink ports are disabled. However, that fast 5 GHz radio array still has full capability.

A year from now, the R710 will be old news, and the market may well have forgotten that Ruckus was first to market with a Wave 2 access point. But for now, it really is a pretty big deal. I have heard that at least one of the market leaders won’t have a shipping Wave 2 AP until the end of 2015 at the earliest.

Given the hype that has preceded Wave 2’s arrival with features like 4x4, MU-MIMO, and speeds that not so long ago would have sounded nonsensical to talk about, it's worth noting that for now at least, Ruckus has an access point that we should all be at least a little bit excited about.

The ZoneFlex R710 is scheduled to become available this quarter for $1,295.