Motorola has released a computing platform that straddles the juncture of science-fiction and real-world technology.
Lee Badman

It’s one thing to work over a network with a smartphone in the palm of your hand. It’s altogether another to control a computing environment from on top of your head. That’s the idea behind Motorola’s recently announced HC1 Headset Computer The new device pushes the boundaries of sophisticated mobile devices that enable new ways for people to work.

Motorola’s HC1 is wearable headset computer designed to be used in highly challenging situations that range from combat to emergency response to inspecting the innards of nuclear reactors. It includes a micro-display unit attached to the headgear that equates to that of a 15-inch virtual display for the wearer. The display can show complex graphics, maps and documents without obscuring the wearer’s vision. It also supports a range of applications that are controlled via voice commands and head gestures for hands-free computing, allowing the user to keep his or her hands on other tools.

By itself, the HC1 is capable of local document delivery initiated by voice command, in which the wearer can request a file to be opened, such as a schematic, and then view that file. That’s a cool feature by itself, but the product offers expanded capabilities when paired with a Motorola MC75A, MC65 and ES400 smartphone or mobile hotspot (purchased separately). When these devices are connected via Wi-Fi or Bluetooth to a network, the wearer can place and receive voice calls. An add-on, 2-megapixel camera provides real-time video of whatever the wearer happens to be looking at. This allows for a high degree of collaboration with team members located off-site.

For a device that rides on your head and weighs in at about a pound and a half, the HC1 packs decent specs. A dual-core Texas Instruments processor and Windows CE operating system form the operational engine of the HC1, and it can support a 32-Gbyte MicroSD card. A purpose-built accelerometer translates head gestures to input, and there are dual microphones for voice input. On the wireless side, Bluetooth and 802.11b/g with encryption to WPA2 round out the tiny little package. The company says the headset is ruggedized for harsh environments. It works with applications from a company called Entervise, and Motorola has also made an SDK available for partners and application developers. 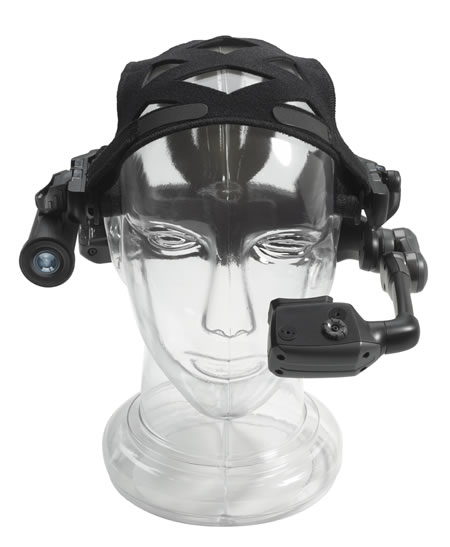 Appearance-wise, the headgear isn’t all that unique. Well-designed, low-profile voice communications have been used by rock stars and special forces for some time, as have a variety of head-mounted camera platforms. What distinguishes the HC1 is its combination of ultra-mobile collaboration with a voice-activated mini-workstation. It’s likely to appeal to a range of professionals who are getting ever more adept at using mobile technology.