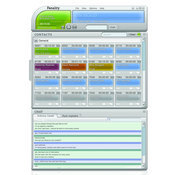 Fonality CEO Dean Mansfield said that market was largely underserved by IP telephony and UC vendors before his company arrived on the scene six years ago. It's an elevator pitch that has an increasingly familiar ring: Get enterprise-grade technology for SMB prices. But Mansfield, formerly an executive with NetSuite, said that there is a gap between low-end "prosumer" solutions and upmarket heavy hitters such as Cisco and Avaya, and that's where Fonality sees its opportunity.

"You've got really complex, expensive, hardware-based solutions from the enterprise trying to be forced down. You've got limited functionality, limited reliability VoIP solutions trying to be pushed up," Mansfield said. "The main reason why I'm here is that I couldn't find a single company that was dedicated to serving the midmarket."

Mansfield defined the SMB market as firms with between 20 and 250 employees. Fonality's current 20,000-customer base extends beyond both ends of that range, but Mansfield said the "vast majority" of the company's business falls within that segment.

"I would say our real sweet spot for our business today is between 20 and 70 or 80 seats," he said. "That's the real market we're attacking."

To that end, Fonality recently added its Heads Up Display (HUD) dashboard to the company's fully hosted communications suite, called Fonality Connect. The suite runs $30 per user, per month.

Re-engineering its HUD product as a hosted service was driven by current customers with on-premises UC solutions that wanted to move into the cloud, according to Mansfield, who added that the trend was especially noticeable among businesses with fewer than 50 employees.

"They don't want servers, and I think telephony is the last great frontier of this," Mansfield said.

Though part of Fonality's approach is to tout the potential for businesses to slash their phone bills, compared with traditional telecom providers such as AT&T or Verizon, Mansfield doesn't necessarily see those companies as competitors.

"Why halve someone's phone bill when they're paying it?" Mansfield said. "I don't really see them either having the appetite financially or from a technology standpoint to be able to compete on this level."

Mansfield said the trend of smaller companies driving cloud adoption -- regardless of the application -- is likely to continue, especially given the increased mobility of SMBs. (Fonality will launch a mobile version of HUD later this year.) Likewise, he thinks that trend has much to do with the significant investment that many large companies have made in data centers and other IT infrastructure, and their unwillingness to sink those costs to move into the cloud.

"This is a technology that's driven upwards, not enterprise-down," Mansfield said. He likes to use Citibank as an example, pointing out that the company has little incentive to move into the cloud because of their spending on premises-based infrastructure.

"Can you imagine the CIO going in front of the board at Citibank and saying 'You know what? We don't need all of those data centers anymore because we're going to move to the cloud.' He's just talked himself out of a job, right?" Mansfield said. "I think enterprises, and also big government, are very, very invested in managing their own solutions."