Now, Dell is focused on disaggregating the networking software itself. OS10 has two parts -- a base module with an unmodified Linux distribution and application modules. The base module, which Dell offers for free with its switches, includes the Open Compute Project Switch Abstraction Interface (SAI), which Dell describes as enabling a common language between network operating systems and switch silicon. Dell co-developed SAI with Microsoft, Mellanox and others, and submitted it to the OCP.

The application modules run on top of the base and provide traditional networking functions with Layer 2 and Layer 3 protocol support via the OS10 Premium package. OS10 also can support  third-party, native Linux applications and tools for security and automation.

At a press briefing, Tom Burns, VP and general manager, Dell Networking and Enterprise Infrastructure, said the Linux-based software gives customers more options for tools to manage applications not just for the network, but eventually also for storage and servers. "This gives customers much more flexibility, not just in networking," he said. 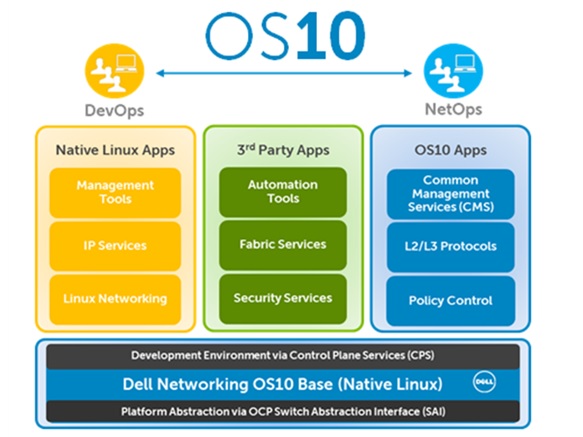 Dell is targeting OS10 at large-scale data centers, touting it as providing a software framework that facilitates customization. While the initial OS10 release focuses on networking, Dell's goal is for it to be a broader platform.

"Our vision is a compute-centric software-defined data center, moving more functionality to a software level rather than down to the individual siloed servers, storage and networking," Burns said.

As for how OS10 will impact Dell's open networking partnerships, Burns said "Dell will continue to honor choice." Depending on the use case, software from a partner like Big Switch may be what a customer chooses, he said.

Tom Hollingsworth, a network engineer and organizer of the Tech Field Day events, said Dell's announcement "is intriguing because it validates both the white-box market and the Linux community. It really shines a light on what Cumulus is doing as well."

He added that it also will be interesting to see how Dell builds out its Premium OS10 product versus allowing third parties to develop on it.

Dan Conde, analyst at Enterprise Strategy Group, said OS10 advances open networking "in the sense that it offers, from a mainstream networking company, an unmodified Linux-based platform for third-party networking services and potentially a platform for other forms of infrastructure."

He expects OS10 to be "another step in Dell's networking evolution."

Dell said the OS10 base module is scheduled to ship in March and its application modules will ship in the third quarter of this year.