As discussed in the previous chapters, Internet Protocol (IP) is a layer 3 protocol. Recall that a primary function of layer 3 is routing of packets across different subnets. Every interface that is connected to the network needs to have an IP address for identification. Since IP addressing design is critical to any network, we will start with a quick recap of IP addressing and then delve into the considerations for IP address planning for networks.

An IP address is a logical identifier for an interface that is connected to the network. Two versions of IP are currently in use: IPv4 and IPv6. We will focus on IPv4 in this book.

An IP address is a 32-bit identifier that uniquely identifies an endpoint on an IP network. Remembering a 32-bit IP address would be a nightmare, so the address is represented as a dotted decimal notation.

Firstly, the 32 bits are grouped into four octets having 8 bits each. Secondly, the IP address is represented in a doted decimal notation, meaning that the four octets are separated by a decimal between them, which is read as a dot while reading the address. Thirdly, the octets are converted into a decimal number for easier identification, and the IP address takes the form A.B.C.D.

The following figure illustrates the steps in converting the 32 bits of an IP address into the familiar dotted decimal notation: 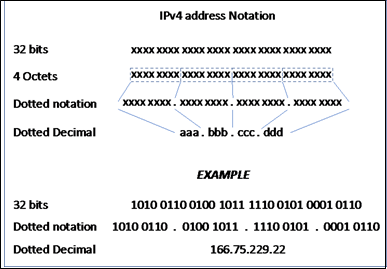 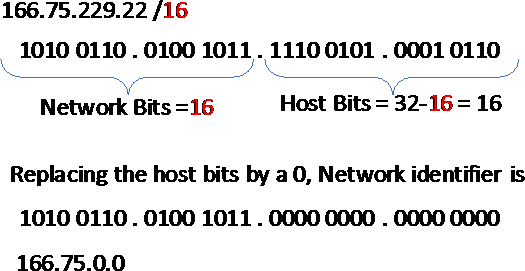 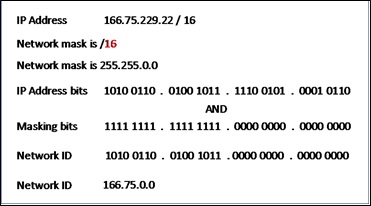 All hosts on the same layer 3 network have the same network number or ID. Therefore, if a network has a mask of /n, the first n bits of the IP address are the network bits. The remaining (32-n) bits out of the 32 bits of the IPv4 address represent the host part of the address. Since the IP addresses are unique, in a subnet the maximum number of host addresses is 2(32-n). The first and last addresses of the range have a special purpose. The first address will be where all the host bits are 0 and, as we discussed earlier, this number represents the network identifier for the network. If all the host bits of an IP address are set to 1, we get an address that is called the IP broadcast address or broadcast ID for the network, which represents the collection of all hosts/interfaces on the network. Hence, the maximum number of hosts/interfaces on a subnet is 2(32-n)-2. The following figure explains this with the IPv4 example: 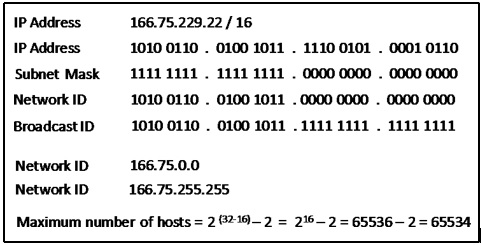 The rationale was based on the fact that there would be large, medium, and small networks, and hence three different classes of address, namely A, B, and C, were devised accordingly. The class A addresses were for the largest networks, where the number of hosts would be very large. It was assumed that very few networks of such types would exist on the internet. Accordingly, 8 bits were reserved in a class A address for the network bits in a class A address, and the remaining 32 bits were for hosts. Since the first bit was already set to 0, this meant that there could be 128 such networks (2(8-1)), and each network could have up to 224 - 2 hosts each. This can also be interpreted as class A networks having a network mask of /8 or 255.0.0.0.

The following table summarizes the hosts and networks for the different classes of address:

The address structure discussed so far is generally referred to as classful addressing. This format of addressing had severe limitations as the IP networks expanded rapidly. Since the number of networks were finite, the demand for IP addresses far outnumbered what was available.

Also, the smallest networks had 254 addresses for hosts. However, even if there were 10 hosts on the network, the remaining addresses could not be used anywhere, the network numbers had to be unique, leading to a lot of wastage of the available IP addresses. This wastage of IP addresses became a big cause for concern and the industry started looking at new ways of reducing this wastage and finding efficient ways to use the available IP address space. This led to the introduction of classless addressing, where in the concept of bucketing all networks into small, medium, and large, and hence allocating class C, B, or A addresses was done away with.

As an example, consider a situation where there were four different LAN segments or networks that had 40 hosts each to be connected. If we had followed classful addressing, we would have assigned a class C address to each of the 4 LAN segments and utilized only 40 addresses out of the 254 available for use in each segment leading to a huge wastage of addresses. In classless addressing, the addressing is done based on the requirement of addresses.

The same address block can be subnetted into four smaller subnets for each subnetwork. Since the address block allocated to us had a subnet mask of /24, the first 24 bits are fixed. Now we need 40 addresses per LAN segment and, as discussed earlier, we need 6 bits as the host bits for each subnetwork. The number of bits that we can use as the subnet bits are 32-24-6 or 2 bits. Using the 2 bits, we can have 22 or 4 subnets. This is shown in the following figure for the address block of 166.75.229.0/24. Note that the subnets now have a subnet mask of /26 or 255.255.255.192 because each subnet now has 26 bits that represent the subnet: 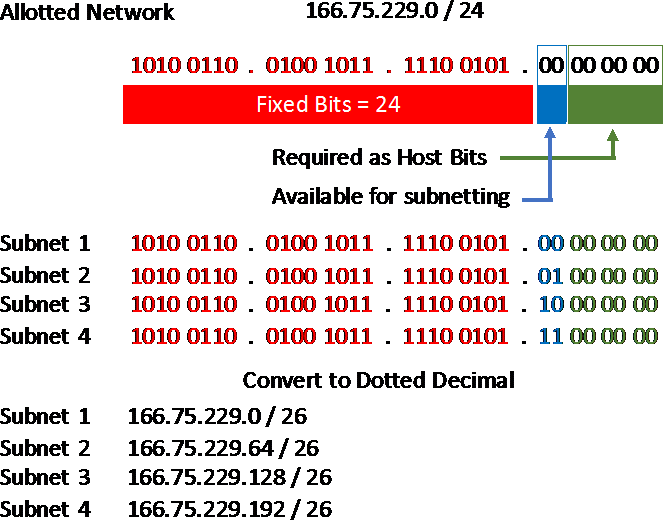 Note that in the new scheme of addressing, the subnet mask is not fixed at octet boundaries, but can have any value as long as it can be represented as a continuous string of binary1 followed by a continuous string of binary 0, and the total number of bits being 32. This concept of splitting subnets for creating smaller subnets, where each subnet can have different subnet masks depending upon the number of addresses required in the subnet is called Variable Length Subnet Masking (VLSM).

This tutorial is an excerpt from "Implementing Cisco Networking Solutions" by Harpreet Singh and published by Packt. Use the code ORNCC10 at checkout to get the ebook for just $10 until May 31.