John Chambers gave his final Cisco Live keynote as Cisco's CEO in an address that was marked by some familiar themes, a bit of nostalgia, and anticipation of a future led by his successor, Chuck Robbins.

Cisco announced last month that Chambers, who has been Cisco's CEO for 20 years, will step down. Robbins will replace him July 26.

On Monday, Chambers received two standing ovations from the crowd of 25,000 Cisco Live customers and employees, who cheered for him enthusiastically when he arrived on stage and again when he wrapped up his keynote by thanking them. For many networking pros, seeing Chambers as CEO for the last time was a historic occasion: 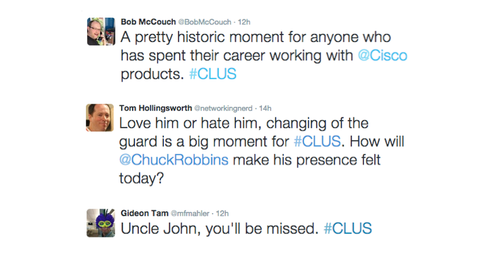 Chambers' keynote centered on a favorite theme of his: Companies that don't innovate fast enough will get left behind, and ticked off competitors that had missed out. Doing his usual roaming around offstage to get up close to attendees, Chambers told them how 40% of the businesses in the room "will not exist in a meaningful way in 10 years" if they fail to make needed changes.

Organizations need to take a "network-driven architectural approach, but we have to know how to discuss it in business terms...It's all about architectures, the days of a single product are gone," he said.

Chambers said Cisco has completely turned on its head. "We moved from selling boxes to selling outcomes," he said, adding that companies need to reinvent themselves, make cultural changes, and break down siloes in order to succeed.

Before introducing Robbins on the stage, Chambers said the company's choice of successor was a three-year process, but that the board's first vote was unanimous.

Robbins, in a pseudo Q&A with Chambers, said he plans to focus on continuing to rapidly innovate. "We’ll crank the pace up like you've never seen," he said. 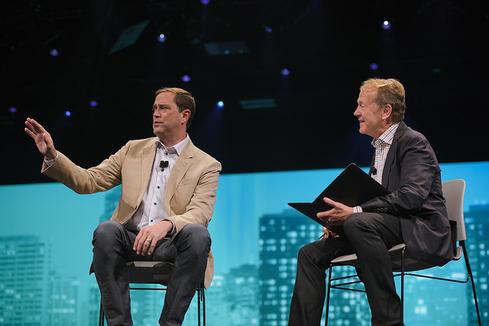 He said he wants to keep up the culture that Chambers has created, but again stressed the importance of moving quickly and transparently. "We felt like once we understood where we were going, we needed to be transparent with our teams and you," he told attendees. "We wanted to send message that we have to move faster."

Last week, Robbins named his executive team and announced five executive departures. Among those departing are President of Sales and Development Rob Lloyd, President and COO Gary Moore, and Chief Strategy and Technology Officer Padmasree Warrior. In announcing his plans, Robbins said the company would be moving to a "flatter leadership team" designed for speed and innovation.

"We'll have to continue reinventing our company to help us move more quickly with all of you," Robbins said Monday. "The fastest will win."

He added that his "real objective is to make the next decade even better than the last two," but then lauded Chambers' leadership and accomplishments, drawing whoops and applause from attendees.

Hollingsworth pointed out what many in the audience really wanted to hear: