The Buzz From Open Networking Summit 2016

In the past, the Open Networking Summit focused heavily on topics such as SDN and NFV, but this year’s conference had a somewhat broader focus. Guru Parulkar, ONS executive director and program chair, kicked off the conference by highlighting how ONS has evolved. We have entered a new era of networking, he said, and two of the characteristics of this new era are disaggregation and the increased use of software and virtualization.

Parulkar’s view was supported by Peter Levine, a general partner at Andreesen Horowitz, a venture capital firm that has invested in companies such as Skype, Facebook, Groupon, and Airbnb. Levine, who joined Parulkar on stage, said the mobile supply chain will eat the network. By that he means that the proprietary hardware that currently is the basis of most networking equipment will be replaced by commodity components. Those components will be a result of the innovation that has created components for the mobile phone industry, such as flash memory and smaller CPUs. As Marc Andreessen said in 2011, Levine believes that software is eating the world.

Most of the other ONS keynote speakers expanded on the themes of disaggregation and the increased use of software and virtualization. One keynote speaker who expressed a somewhat contrarian view was Omar Baldonado, director of network engineering at Facebook and the co-chair of the Open Compute Project. He said that Facebook founded OCP because the company didn’t see the marketplace providing the solutions it needed. Baldonado added that Facebook believes there still is a lot of innovation that  can be done in hardware; the company doesn’t believe that in the near term networking will be all about software running on commodity hardware.

Another characteristic of the new era of networking is the increased use of open source, Parulkar said. Open source was a major theme of this year’s ONS, which shouldn’t be surprising because in November, the ONS became a Linux Foundation event. 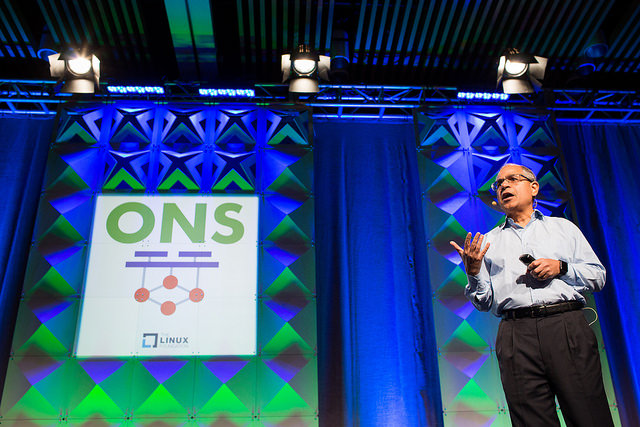 One open source community that I am very familiar with and which was very visible at the ONS conference is the OpenDaylight Project. Founded in 2013, ODL's mission is to facilitate a community-led, industry-supported open source framework, including code and architecture, to accelerate and advance a common, robust SDN platform and to create a solid foundation for NFV. In February 2016 ODL announced the availability of its fourth software release, Beryllium.

Neela Jacques, executive director of ODL, told me in a recent conversation that one of the real challenges every open source community faces is that within an open source community, there isn’t currently and never will be a benevolent dictator for life. As such, even though he’s the executive director of ODL, if there were some functionality that he thought should be added to their next software release, he couldn’t just mandate that the community develop that functionality. Rather, he would have to work with the community and convince it to prioritize the development of that functionality.

There are other aspects of open source that can be viewed simultaneously as an advantage and a challenge. One such characteristic is the breadth of open source solutions. For example, one speaker at the ONS conference presented a model of open source software solutions that reminded me of the OSI model. However, whereas the OSI model has seven layers, this open source model has 10. These layers include the hardware layer (OCP), the network controller layer (ODL), the carrier networking layer (Open Platform for NFV), containers (the Open Container Initiative) and application platforms (Cloud Foundry). Looking at this model, I was struck by how complex it would be to aggregate all 10 layers into a complete solution.

While I don’t fundamentally disagree with how Parulkar characterized the emerging era of networking, I am less bullish about it in the short term than he is. I agree that disaggregation is happening, but it’s not of interest to many segments of the market, including virtually all enterprise organizations. I also agree that there is a growing emphasis on software, but I also believe that customized hardware will continue to add value for a long time.

Moreover, I see great value in solutions based on open source, primarily because in line with the goal of ODL, I believe they speed up the development of new solutions. I don’t however, see that open source is a panacea that will fundamentally change the networking industry in the next couple of years.

Looking for more hot technology trends? Learn about the Future of Networking at a two-day summit presented by Packet Pushers at Interop Las Vegas, May 2-6. Don't miss out -- Register now!