Learn the basics about access control lists and how to configure them for IP traffic filtering on a network.
Andrew Froehlich

Configuring the two most common ACLs

While there are many ACL types, the most common ACLs used for filtering IP traffic are standard and extended. Each type has slightly different capabilities depending on what level of packet matching granularity you need. Let’s look at the capabilities of both ACL types and how to configure them.

The most basic of all IP ACLs is the standard ACL. These ACLs are designated by using the ACL number between 1 and 99 and 1300 to 1999. Besides numbering an ACL so it is designated as standard, admins will specify source IP networks, as well as whether the ACL should permit or deny those specified networks. Note that only the source network can be used to identify traffic to filter on.

Note that ACLs use what is known as a wildcard mask to specify the subnetwork. So instead of using a mask of 255.255.255.0 for the 10.100.250.0/24 network, the wildcard mask configured in the ACL entry should be 0.0.0.255. Also, make sure you understand that we must have the permit statement on the second line of the ACL. Because each line of the ACL is read top down, the deny statement will identify any packets coming from 10.100.250.0 /24. If the packet is coming from any other source, it will match the permit any statement, and be allowed through. If we did not have a permit statement, the implicit deny-any statement at the end of all ACLs would block all IP traffic

Extended ACLs are just like the standard ones with the exception that protocol and port information can be used and both the source and destination networks may be defined in the rules. Extended ACLs use designated numbers 100 through 199 and 2000 to 2699. Just like standard ACL's, the subnet mask uses wildcard masks when configuring the subnetwork. Extended ACLs can be configured to match an IP (which includes both TCP and UDP), TCP, UDP or any number of additional protocols as shown below. 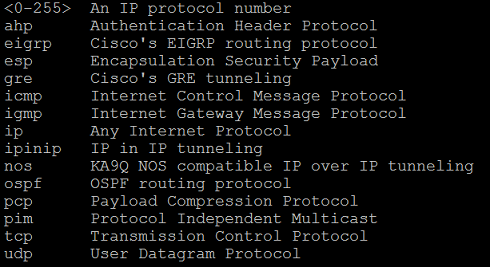 As you can see, when we specify both the source and destination networks, the source IP network is entered first, followed by the destination IP network. The eq 80 in the first access control entry is a match rule specifying that the port equals (eq) TCP port 80 exactly. There are many other match options such as ranges of ports, greater than, less than and quality of service (QoS) markings, among others. Here are all the options available: 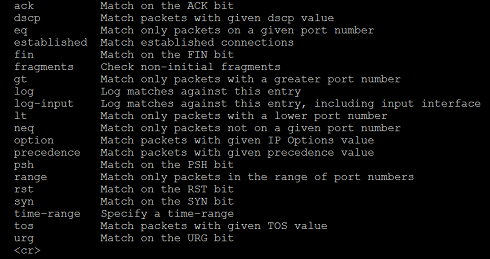