Deploying Network Virtualization In The Enterprise

Network virtualization can be categorized into the following three primary models, each of which has different techniques that can serve different requirements:

Moreover, you can use the techniques of the different models individually to serve certain requirements or combined together to achieve one cohesive end-to-end network virtualization solution. Therefore, network designers must have a good understanding of the different techniques and approaches, along with their attributes, to select the most suitable virtualization technologies and design approach for delivering value to the business.

■ Virtual LAN (VLAN): VLAN is the most common Layer 2 network virtualization technique. It is used in every network where one single switch can be divided into multiple logical Layer 2 broadcast domains that are virtually separated from other VLANs. You can use VLANs at the network edge to place an endpoint into a certain virtual network. Each VLAN has its own MAC forwarding table and spanningtree instance (Per-VLAN Spanning Tree [PVST]).

■ Virtual routing and forwarding (VRF): VRFs are conceptually similar to VLANs, but from a control plane and forwarding perspective on a Layer 3 device. VRFs can be combined with VLANs to provide a virtualized Layer 3 gateway service per VLAN.

As illustrated in Figure 3-10 , each VLAN over a 802.1Q trunk can be mapped to a different subinterface that is assigned to a unique VRF, where each VRF maintains its own forwarding and routing instance and potentially leverages different VRFaware routing protocols (for example, OSPF or EIGRP instance per VRF).

Path isolation refers to the concept of maintaining end-to-end logical path transport separation across the network. The end-to-end path separation can be achieved using the following main design approaches:

■ Hop by hop: This design approach, as illustrated in Figure 3-11 , is based on deploying end-to-end (VLANs + 802.1Q trunk links + VRFs) per device in the traffic path. This design approach offers a simple and reliable path separation solution. However, for large-scale dynamic networks (large number of virtualized networks), it will be a complicated solution to manage. This complexity is associated with design scalability limitation.

■ Multihop: This approach is based on using tunneling and other overlay technologies to provide end-to-end path isolation and carry the virtualized traffic across the network.

The most common proven methods include the following:

■ Tunneling: Tunneling, such as GRE or multipoint GRE (mGRE) (dynamic multipoint VPN [DMVPN]), will eliminate the reliance on deploying end-to-end VRFs and 802.1Q trunks across the enterprise network, because the vitalized traffic will be carried over the tunnel. This method offers a higher level of scalability as compared to the previous option and with simpler operation to some extent. This design is ideally suitable for scenarios where only a part of the network needs to have path isolation across the network.

However, for large-scale networks with multiple logical groups or business units to be separated across the enterprise, the tunneling approach can add complexity to the design and operations. For example, if the design requires path isolation for a group of users across two “distribution blocks,” tunneling can be a good fit, combined with VRFs. However, mGRE can provide the same transport and path isolation goal for larger networks with lower design and operational complexities. (See the section “WAN Virtualization,” in Chapter 4 for a detailed comparison between the different path separation approaches over different types of tunneling mechanisms.)

■ MPLS VPN: By converting the enterprise to be like a service provider type of network, where the core is Multiprotocol Label Switching (MPLS) enabled and the distribution layer switches to act as provider edge (PE) devices. As in service provider networks, each PE (distribution block) will exchange VPN routing over MP-BGP sessions, as shown in Figure 3-12 . (The route reflector [RR] concept can be introduced, as well, to reduce the complexity of full-mesh MP-BGP peering sessions.)

Furthermore, L2VPN capabilities can be introduced in this architecture, such as Ethernet over MPLS (EoMPLS), to provide extended Layer 2 communications across different distribution blocks if required. With this design approach, the end-to-end virtualization and traffic separation can be simplified to a very large extent with a high degree of scalability. (All the MPLS design considerations and concepts covered in the Service Provider part— Chapter 5 , “Service Provider Network Architecture Design,” and Chapter 6 , “Service Provider MPLS VPN Services Design,” —in this book are applicable if this design model is adopted by the enterprise.) 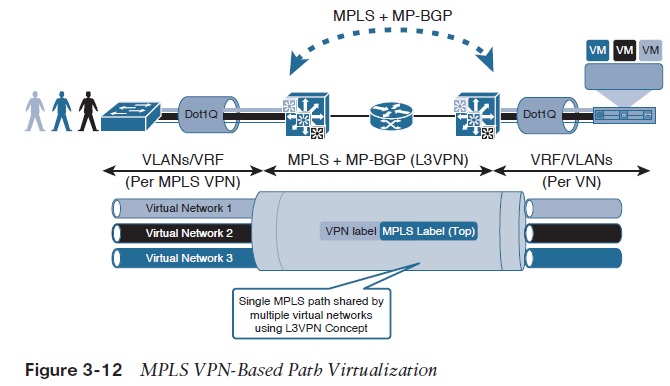 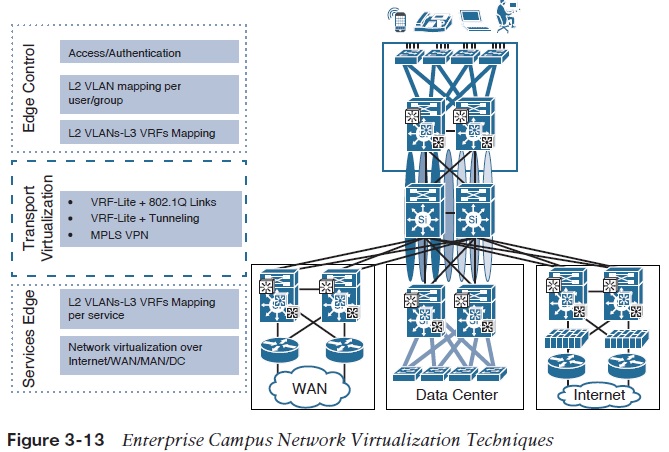 As mentioned earlier in this section, it is important for network designers to understand the differences between the various network virtualization techniques. Table 3-3 compares these different techniques in a summarized way from different design angles. 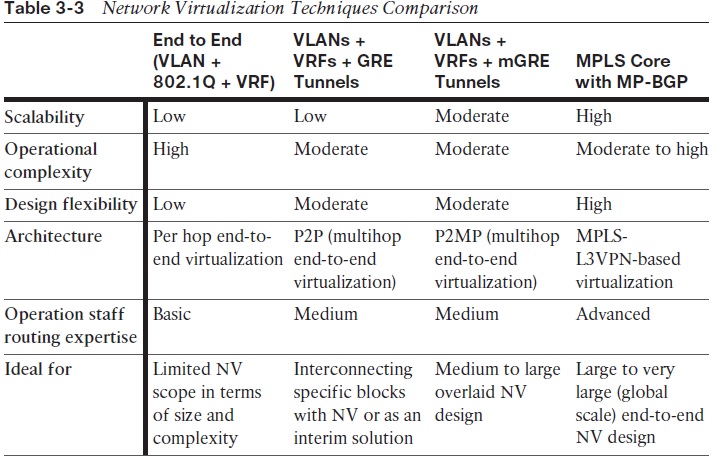 One of the main goals of virtualization is to separate services access into different logical groups, such as user groups or departments. However, in some scenarios, there may be a mix of these services in term of service access, in which some of these services must only be accessed by a certain group and others are to be shared among different groups, such as a file server in the data center or Internet access, as shown in Figure 3-14 .

Therefore, in scenarios like this where service access has to be separated per virtual network or group, the concept of network virtualization must be extended to the services access edge, such as a server with multiple VMs or an Internet edge router with single or multiple Internet links. 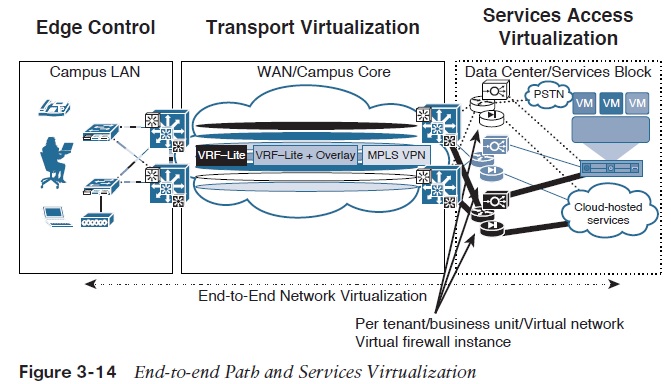 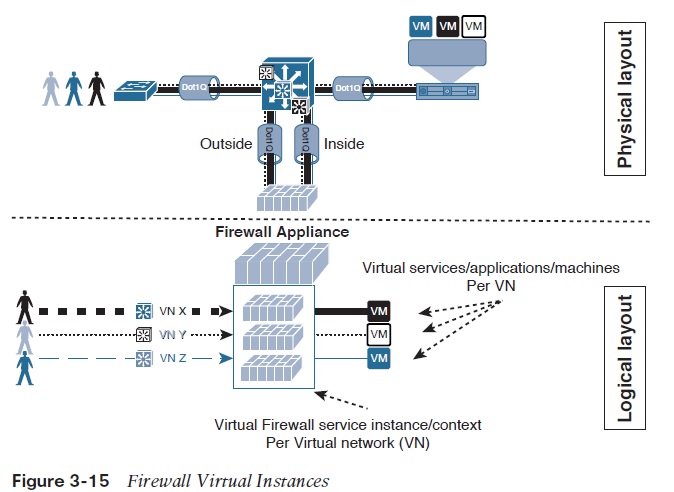 Furthermore, in multitenant network environments, multiple security contexts offer a flexible and cost-effective solution for enterprises (and for service providers). This approach enables network operators to partition a single pair of redundant firewalls or a single firewall cluster into multiple virtual firewall instances per business unit or tenant. Each tenant can then deploy and manage its own security polices and service access, which are virtually separated. This approach also allows controlled intertenant communication. For example, in a typical multitenant enterprise campus network environment with MPLS VPN (L3VPN) enabled at the core, traffic between different tenants (VPNs) is normally routed via a firewalling service for security and control (who can access what), as illustrated in Figure 3-16 .

Figure 3-17 zooms in on the firewall services contexts to show a more detailed view (logical/virtualized view) of the traffic flow between the different tenants/VPNs (A and B), where each tenant has its own virtual firewall service instance located at the services block (or at the data center) of the enterprise campus network. 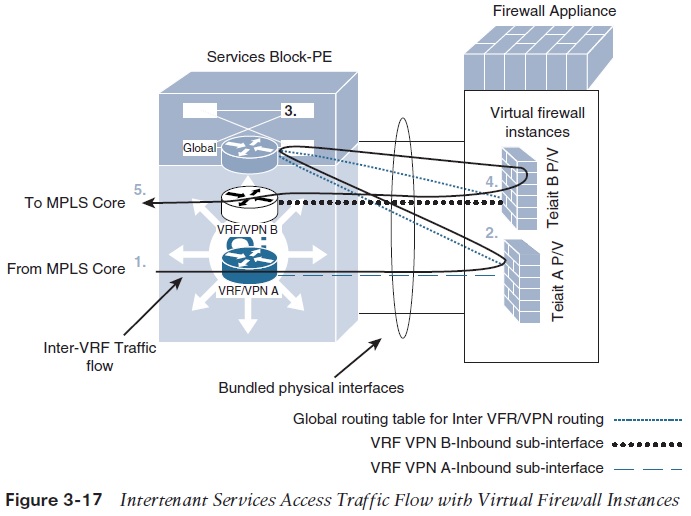 For more on network virtualization and campus network design, download the full chapter and book index.