As with many other hyperconverged infrastructure products, VMware VSAN had a minor storage efficiency problem. Simple data replication and a shared- nothing architecture meant that VSAN frequently required users to buy three times as much storage capacity as they had data to store. With VSAN 6.2, VMware’s gone a long way to make VSAN more efficient by reducing data and using basic erasure coding to lower VSAN’s data-protection overhead, bringing it in line with most modern storage systems.

The most obvious savings comes from VSAN 6.2’s data reduction, which uses both compression and deduplication. Rather than reducing data inline, before it’s written to any persistent flash, VSAN reduces data as it is migrated from the write cache/performance tier down to the system’s capacity tier. VMware dubbed this “nearline” deduplication, and like inline reduction, it increases the capacity of the system in a predictable way. Since VSAN only uses the performance solid-state drive as a write cache, holding the dedupe process until data is trickled down to the capacity SSDs saves the system from the CPU overhead of deduping those data blocks that are rapidly changing. This seems like  a fair tradeoff.

I’m more concerned that each disk group on a host is a separate deduplication realm. Organizations building sizeable VSAN clusters will have to choose between using multiple disk groups to control the size of their failure domains and optimal data reduction. 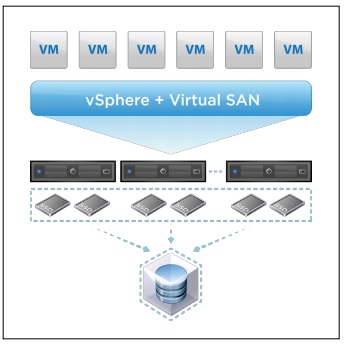 VSAN’s erasure coding uses a distributed parity scheme 3+1 for a failures to tolerate (FTT) level of one and 6+2 for FTT=2. Yes dear reader, parity is a form of erasure coding, even if we in the storage industry have frequently reserved the term for codes that provide protection from more than two or three device failures as implemented in object storage systems from IBM (Cleversafe) and HGST (Amplidata). VSAN erasure coding, like data reduction, is applied as data is written from the write buffer to the capacity layer.

Erasure coding will create a significant amount of network traffic and since VSAN has never enforced data locality, storing the data for each VM on the host that the VM is running on, like Nutanix does, means storage performance will depend on sufficient low- latency network bandwidth between the VSAN hosts. Past attempts at distributed parity, like LeftHand’s LAN RAID, have struggled with limited network capacity.

Just as VSAN 6.2’s distributed parity is about the minimum functionality that can honestly be called erasure coding, VSAN’s IOPS limits are a form of QoS, but pretty much the least a storage vendor can do and still call it QoS without me throwing the shenanigans flag on the field. Administrators can add IOPS limits to their storage policies, and if a VM requests more IOPS than its 1000 IOPS quota, VSAN will delay its responses to provide the VM with the 1000 IOPS to which it’s entitled.

The problem with simple quotas is that they apply even when the system has plenty of performance headroom to give that development server the 3,000 to 4000 IOPS it was requesting. Proper QoS should only reduce the performance of one VM when it becomes enough of a noisy neighbor to bother the other VMs. Simple quotas stop your teenage self from playing The Who’s “Baba O’Riley” with the volume turned up even when grandma who complains is out of town.

When VMware first released VSAN, it had a simple pricing model. VSAN cost $2,495 per host CPU or $50/desktop when used exclusively for VDI. With 6.2, that simple model has become a three-tier model with variations for all VDI, ROBO and data center deployments.

All in all, VMware has brought VSAN a long way in a short time. Erasure coding and data reduction make all-flash VSAN configurations affordable for the hyperconverged infrastructure  sweet spots of VDI and remote offices.