EARLY LEADS
As the market leader, VMware is well positioned to take advantage of the continuing expansion of virtualization. And while it's never safe to count out Microsoft, and XenSource will be a stronger competitor under Citrix, the company essentially has the field to itself until the first or second quarter of 2008, when Microsoft's hypervisor will be available on Windows Server 2008.

Microsoft has shown itself to be a master at making up for lost time. And the field is nowhere near saturated. IDC estimates that only 17% of the worldwide server market will be virtualized by 2010, up from 5% in 2005.

But so far, time is on VMware's side. BMC's Fomin says he's surprised at how fast virtualization technology is being adopted. "When I grew up, in the data center you always waited for version 2.1," he says. "But customers are adopting the technology at a much faster pace from when it's made available than I've ever seen." 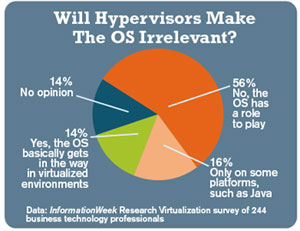 And because VMware is the market leader, other vendors are compelled to forge relationships and build products around its platform. As the customers of third-party vendors adopt virtualization, they push the vendors to create advanced features that are virtualization-aware. For instance, BMC's Performance Manager for Virtual Servers, which now supports only VMware's ESX platform, will be adding features around virtual machine mobility, including the ability to track the number of times a VM is moved, which may indicate that particular VMs need a bigger resource pool.

Smaller vendors and startups also are focusing their development attention on VMware. That's the case with VKernel, which has a virtual appliance by the same name that provides resource monitoring and chargeback capabilities only for ESX environments (see story, "How Much Is That VM In The Window?").

Of course, third-party vendors will always go where the money is. If Microsoft and XenSource earn greater market share, vendors will develop to those platforms as well. But that's more lost time as these companies lay down the legal and technical groundwork required to support other hypervisors. Meanwhile, VMware can demonstrate to potential customers that a robust infrastructure already is in place.

THE KING IS DEAD, LONG LIVE THE KING
It's too early to declare a winner in the battle between Microsoft and VMware. But the upstart has done an admirable job of preparing the ground in its favor. Every day that Microsoft's hypervisor is absent is another day VMware's hypervisor gains easy market share. VMware has assembled a large and growing ecosystem of big and small vendors that are increasingly making VMware the linchpin of a virtualized data center.

Most important, the transition to a virtualized environment, in which the operating system is no longer the software foundation of a server infrastructure--and in some cases isn't even required to run applications--robs Microsoft of a core power base.

Virtualization won't kill the operating system, but it does shift the balance of power. The ground is too unstable to declare a new king, but one thing is clear: The throne will be a hypervisor.