THE HYPERVISOR RISING
In 2006, IDC predicted that factory installations of preconfigured operating systems on servers would decline as customers instead chose server hardware with a hypervisor preinstalled.

VMware's latest release aims to make that prediction a reality. Last month, it introduced ESX Server 3i, a 32-Mbyte hypervisor that comes integrated with hardware shipped by server vendors, including Dell, Hewlett-Packard, IBM, and Fujitsu. These servers will boot directly into a hypervisor. XenSource also announced XenExpress OEM Edition, which will let server vendors install the Xen hypervisor. Xen, which is being acquired by Citrix Systems, says it will announce OEM partners later this year. 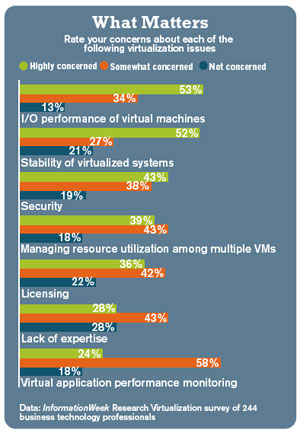 This represents a significant change to the old order, in which the operating system represented the core of a software infrastructure. With ESX 3i and XenExpress OEM, the hypervisor undercuts the OS and usurps its position as the default software layer in a server environment.

The more that the virtual layer becomes the mediator, the more an ecosystem grows around it, both in hardware and software. The hypervisor becomes the point of contact between other essential layers of the enterprise, including management and storage. VMware has more than 150 technology part-ners building products or integrating existing systems around its virtualization platform, from small startups to giants such as BMC, HP, IBM, and Symantec.

In many enterprises, the default assumption is that new applications will be deployed in virtualized environments. "Customers are saying they have to justify not virtualizing new apps," says Rich Fomin, lead product manager for BMC Performance Manager.

As companies consolidate their server infrastructures to reduce costs and create service-oriented resource pools, virtualization's influence on the data center will only grow. Issues such as uptime and availability will be directly affected by the way VMs consume resources, which makes the hypervisor a key management touch point.

Qualcomm agrees. The company's data center makes extensive use of virtualization to provide applications on demand to its business units. The company runs about 2,000 simultaneous virtual machines, down from about 3,500 over the past four years. It decommissioned 1,500 to avoid unnecessary costs such as licensing and resource consumption.

Part of the reason Qualcomm found itself overprovisioned was that business units hadn't adjusted to the way that virtualization changes resource allocation and the capacity of IT to meet business needs. "The concept of having a machine that a business unit owns has changed," Poppleton says. "It used to be, once they got hardware, they held on to it for dear life." Virtualization means that resources can be spun up or spun down on demand. To that end, Qualcomm uses software from Dunes, acquired by VMware last month, to automate the commissioning and decommissioning of virtual machines.