AN ENDANGERED OS?
Applications will always need an operating system to run, right? Not with BEA's WebLogic Server Virtual Edition, or WLS-VE. It replaces the conventional OS with LiquidVM, a microkernel-based Java virtual machine. In turn, the Java VM runs directly on a VMware hypervisor, without the need for Windows or Linux. "We realized the hypervisor had eaten into a lot of what an application needs from an OS," says Guy Churchward, VP and product manager of WebLogic products at BEA.

Java-based applications are ideal candidates for running without a general-purpose operating system, because they already run inside a Java virtual machine, which abstracts the OS functionality of Windows, Linux, and Unix variants. The Java VM provides some OS functions, including memory and CPU allocation, as well as networking (see chart, below). BEA added other capabilities, such as input/output management, that normally are handled by an operating system to the LiquidVM.

No OS Required
BEA's LiquidVM runs Java apps directly on a hypervisor with no operating system. The Java virtual machine and the hypervisor take over functions normally performed by the OS.

Meanwhile, the hypervisor is handling other functions, such as loading device drivers, which are also usually managed by the operating system. The result, says Churchward, is that the OS ended up completely replicating the functionality of the Java VM and the hypervisor.

By jettisoning the OS entirely, Churchward says, WLS-VE consumes 25% to 50% fewer resources, such as memory and CPU cycles, while boosting overall system performance. Other benefits include reduced management, because IT doesn't have to maintain a separate operating system.

First American, a Fortune 500 business information services company, runs two applications on the WLS-VE platform. Mark Vaughn, manager of Web hosting services for the First American Mortgage Information Services Group, plans to increase the company's use of WLS-VE. "Going forward, I anticipate that almost all of our BEA deployments will be on virtual platforms, and we'll see a growing presence of WLS-VE," Vaughn says.

Not only will this architecture eliminate OS management costs, Vaughn says, but he also expects to increase the number of virtual machines per physical server because of the reduced overhead of a microkernel vs. a full operating system. In addition, WLS-VE supports several of VMware's most popular features, including VMotion, which lets managers move applications from one physical machine to another without disruption.

Wireless technology vendor Qualcomm expects to deploy a testing environment for Liquid VM in the near future. "These appliances should perform better and would likely use fewer resources," says Paul Poppleton, senior staff engineer at Qualcomm. "Done correctly, they should be infinitely more secure and require far less patching."

Other IT professionals are intrigued by the proposition of jettisoning the general-purpose operating system. "Speaking personally, I think it's a great way to go," says Gregory Smith, director of dynamic services for T-Systems North America. T-Systems, owned by Deutsche Telekom, is an IT service provider for DT, Volkswagen, and other global enterprises. "A full-featured, everything-to-everybody OS is not a requirement for every application," Smith says. 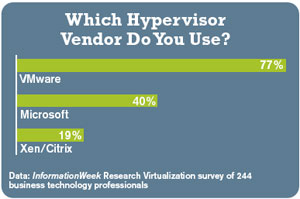 Not everyone is as enthusiastic, however--particularly those with an operating system to sell. "Bad idea," says David Greschler, Microsoft's director of integrated virtualization. "The model suggests that the app vendors have to become the owners of these operating systems, so you have 100 apps that are running a slightly different version of a semi-OS, and you have to go to each of them to get the patch." He says this approach won't scale if more vendors go down BEA's path. That sentiment seems to fly in the face of the current IT experience, where appliance operating systems are routinely managed by independent software vendors.

Greschler also asks whether ISVs really want to take on the responsibility of developing these semi-operating systems, a concern that T-Systems' Smith echoes. "There's a lot of moving parts here," Smith says. "You have to assume nirvana, where ISVs deliver these nice clean containers. It sounds attractive, but it's a long way between here and there."

While VMware's comments about general-purpose operating systems seem to be aimed at Microsoft, virtualization is game-changing for Linux, too. IBM and Sun Microsystems have both positioned Linux as a platform for running Java-based applications, but initiatives such as Liquid VM eliminate the need for the OS. First American would probably be running its applications on Linux if it weren't using BEA's LiquidVM, Vaughn notes.

ISVs that want to create micro-operating systems for other applications will probably start with Linux, just as appliance vendors do now. Is it still Linux? Well, sort of. You'll be running the Linux core, but instead of getting it from IBM, Red Hat, or Novell, you'll get a custom-fitted version from your ISV.