Bucking the trend towards increasingly feature -rich all flash arrays, SanDisk’s InfiniFlash takes a back-to-basics approach. It  eschews such popular features as data deduplication and even snapshots while emphasizing record-setting density and, for an all-flash system, low cost.

Like the drive expansion shelves we’ve been hanging off our disk arrays for years, the InfiniFlash doesn’t include any of the functionality normally provided by the controllers in an array, so I resist calling it an all-flash array. If those drive expansion shelves are JBODs (just a bunch of disks), then InfiniFlash is just a bunch of flash, or a JBOF.

While most people think of SanDisk as a vendor of flash-based consumer products like SD cards and USB drives, the SanDisk story goes a lot deeper than that. In truth, SanDisk co-owns flash foundries with Toshiba and is an equal partner in flash R&D with them. When I toured SanDisk’s facilities during Storage Field Day last year, I was impressed with the electron microscopes and prototype wafers that showed SanDisk was clearly involved at the chip level.

As you can see in the photo below, SanDisk even let me play with the wafers, but I didn’t get to take one home. 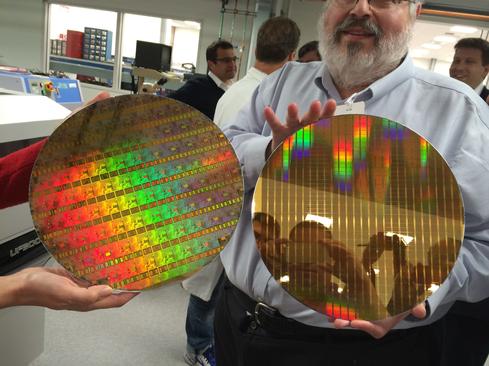 Over the past few years, the company has  been beefing up its enterprise storage position by buying Pliant for SAS SSDs and controller technology, Smart Storage for SATA SSD tech, and Fusion-IO.  As a flash foundry, SanDisk wanted to tell a flash-everywhere story and spun off NexGen Storage to stay out of the hybrid market.

That said, the InfiniFlash appliance is not, at least in its initial configurations, targeted at the enterprise. The InfiniFlash 100 is a 3u flash JBOF with 64 8 TB hot swappable flash modules for a total of 512 TB of raw capacity. The resulting density of 170.6 TB per rack unit is several times the density of any of the currently shipping AFAs, which generally come in at under 30 TB per unit after deduplication and compression.

The only system that ever came close was Skyera Skyhawk, which as far as anyone outside the NSA knows, didn’t actually ship before Skyera blew up and was devoured by Western Digital’s HGST division.

The InfiniFlash provides access to all that flash through eight SAS ports, which allows just eight servers to connect to the big pool of flash. While there is parity within each flash module to protect against flash block or chip failures, in all other ways the InfiniFlash 100 is a JBOF presenting 8 GB modules to SAS ports. While any half-petabyte flash system is going to cost more than the average house, SanDisk is saying that InfiniFlash will cost $2 /GB raw and on the order of $1/GB with data reduction so an InfiniFlash 100 will set you back about a megabuck. 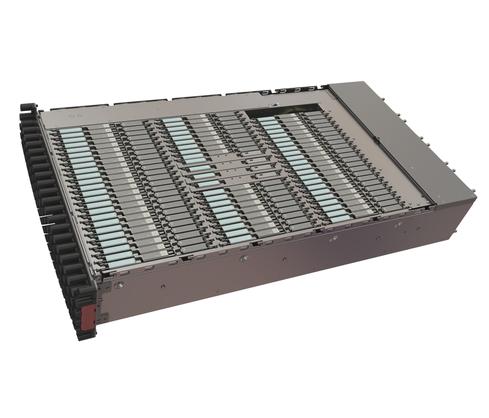 InfiniFlash appliance is aimed at web-scale applications and hyper-scale data centers where data sets are so big that putting them on today’s all-flash arrays isn’t economically viable. An IDC report SanDisk sponsored claims this defines a new class of storage they’ve dubbed “Big Data Flash” that falls in between today’s high-performance AFAs and disk-based storage.

InfiniFlash’s performance also falls in this in-between space by delivering 780,000 IOPS, which since SanDisk didn’t specify, we can assume were 4K 100% read, and 7 GBps throughput. While impressive, that's  significantly less than we would expect from 512 TB of flash.

I do have to call shenanigans on SanDisk regarding the IntelliFlash IF500 and IF700 models, which are bundled with a flash-optimized version of Ceph and the ION software the company acquired with Fusion-IO. The SanDisk website, and the announcement presentation video, imply that Ceph and ION run on the InfiniFlash platform. In reality Ceph and ION run on customer-provided servers attached to the InfiniFlash. While that’s what many big operators will want, enterprises would prefer a less roll-your-own solution.

InfiniFlash represents a new approach to flash-based storage. Personally, I’m waiting for a version 2.0 that will support multi-pathing and maybe LSI’s external SAS switches.  Then I could use it as with a server SAN or other software-delivered storage technology to create interesting all-flash solutions.

Attend Howard Marks' live workshop, Making Cloud Storage Work for Your Organization, at Interop Las Vegas this spring. At Interop, Howard also will participate in two panels, The New Storage: From Flash to Cloud to Hyperconverged, and Should Your Infrastructure Look Like Google's? He'll also present The Cloud Is My DR Site.

Register now for Interop, April 27 to May 1. Don't miss out!