As the executives at 128 Technology see it, the internet is essentially broken, making the job of networking far too complex and fragile. Networks are built on protocols that haven't changed in 25 years yet networking demands have grown exponentially with the rise of the cloud. The solution, they say, is a completely different take on routing.

"Everything in the network is processing packets," CEO and Co-Founder Andy Ory told me in an interview. "What if we could go back 20 years and rethink routing? What if we made routing smarter? By smarter, we mean endowing it with two additional qualities: make it session-oriented and deterministic in terms of its ability to select, manage, and enforce routes bi-directionally."

The Burlington, Mass.-based startup recently launched out of stealth with its Secure Vector Routing software platform, which it says will simplify networking and make it more secure. By being session-oriented, the software provides security and other capabilities without the need for extra boxes like load balancers and firewalls or complicated techniques, the company claims.

He argues that the approach is better than the various software-defined networking architectures or network functions virtualization, which he said only add more complexity.

128's software, which it offers for free, runs on white-box servers and is designed to be integrated into existing L2/L3 networks without requiring a rip-and-replace. The startup plans to make money by charging on a monthly consumption basis.

"You can download our software and sprinkle bits of routing everywhere you need it to be and not pay anything," he said. "Once you know how much routing you want to consume, we aggregate it and average it to eliminate all the peaks and bursts."

I reached out to networking expert Ethan Banks, co-founder of Packet Pushers, for his thoughts on 128. In an email interview, he described the startup's technology as ambitious. By baking session-awareness and security into a distributed control plane, it can treat different traffic flows in different ways depending on policy, he said.

"This isn’t so unusual in principle. Many SDN architectures deliver this sort of functionality. However, 128 Technology differs from typical SDN approaches in that it retains a distributed control plane instead of relying on a centralized controller," Banks said.

"What’s more, 128 Technology does not use overlays -- tunneling -- to achieve policy goals. Rather, it uses CG-NAT to guide traffic at scale between its routing nodes," he added. "While NAT has a bad reputation among many network engineers, 128 Technology is using NAT in a way similar to how a tag or tunnel header is often used in multi-tenant networking -- as a way to guide payload traffic between its nodes while maintaining session awareness. Application-level NAT problems should be avoided, as the source and destination addresses are translated back to the original addresses before delivery to the final destination."

Because 128's router works either as a hypervisor vSwitch replacement or as a stand-alone router on a dedicated x86 box, it can be used into a broad range of deployment scenarios, Banks said. He sees the technology as a practical option for enterprises, which could use it for data center multi-tenancy, data center interconnection, and next generation WAN or SD-WAN.

Ory was co-founder and former CEO of session-border controller company Acme Packet, which Oracle bought in 2013 for $2.1 billion. Co-Founder and COO Patrick Melampy also co-founded Acme, where he was CTO. 128 Technology has raised $36 million in funding and counts about 65 employees and about 40 are engineers.

The company's software is generally available and customer trials are under way. 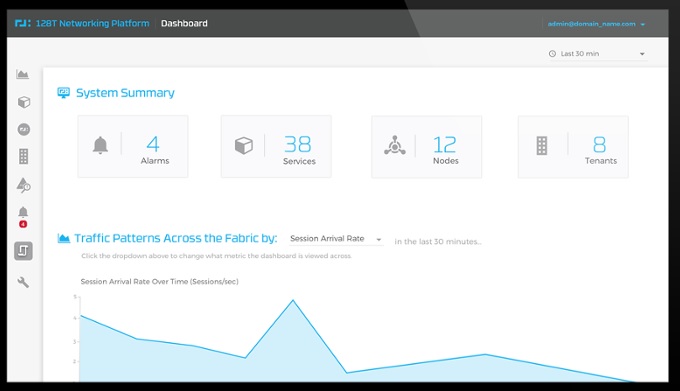