The Hyperconvergence Craze: More Than Hype

Survey shows that VDI remains a top use case for hyperconverged infrastructure, and a need for efficiency rather than frustration with legacy storage is driving interest in the technology.
Marcia Savage

Without a doubt, hyperconvergence is hot. Startups and established vendors alike are jumping on the hyperconvergence bandwagon. According to Wikibon Senior Analyst Stuart Miniman, this emerging market tallied $6 billion in revenue last year as enterprises adopted hyperconverged infrastructure faster than expected.

A new report provides some insight into all the hubbub over these systems that integrate compute, storage, networking and virtualization on commodity hardware. Based on a survey of about 500 IT pros, the 2015 State of Hyperconverged Infrastructure Market Report shows that hyperconvergence is living up to the hype, said Scott D. Lowe, a VMware vExpert and author of the report.

"A lot of technologies like this get hyped to the point of absurdity," he said in an interview. "The difference here is people report that the technology is actually living up to its promise."

The expectations of survey respondents who plan to adopt the hyperconverged infrastructure compared reasonably well against the experiences of those who have actually deployed the technology, he said. For example, the report -- which was produced by ActualTech Media with hyperconvergence vendor SimpliVity -- showed that 48% of planned adopters expect improved scalability with the technology while 42% of current adopters reported scalability benefits.

Still, it's very much early days for hyperconvergence, the survey showed. Only 24% of the respondents have deployed hyperconverged systems, and those who plan to adopt the technology aren't moving ahead with it right away. Rather, their timeframes are 18 to 24 months.

"We're very early in this game," Lowe said. "In the next year to 18 months, we'll see significant uptick." 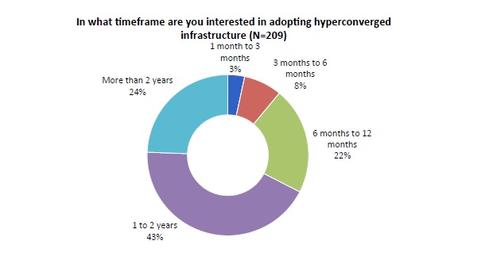 Virtual desktop infrastructure (VDI) has been a top use case for hyperconverged infrastructure, and remains so, the survey found. "Traditional storage arrays are the Achilles heel for VDI," Lowe said, adding that flash was just emerging when VDI hit the market. Flash has become more ubiquitous, but some organizations are still wary; hyperconvergence is well suited to VDI because of its hybrid storage nature, he said.

"I think people are starting to see they can do VDI in way that doesn't create massive complexity," he said.

A use case that should be high on the list for hyperconvergence, but wasn't reflected in the survey findings is improving backup and disaster recovery, Lowe said. While survey respondents ranked it as the top priority for their organizations, only 28% of those planning to implement hyperconverged infrastructure cited it as a benefit they expect to gain from the technology.

Those polled ranked improving operational efficiency as a top priority, and reducing complexity was a major theme of the report, Lowe said. "We in IT sometimes build things that are too complex with too many moving parts," he said. "I'm happy to see people think about the idea that we have to make these environments simpler to manage so we can be of better use to the business."

However, one thing that isn't driving organizations towards hyperconvergence is dissatisfaction with legacy storage systems, according to the survey. Only 3% of survey respondents cited it as a driver.

"That really surprised me. I thought it would be more," Lowe said. "Storage is a beast. It's monolithic, complex and expensive. We always hear about storage performance challenges as we try to do new things."