How Do You Modularize A Network?

In this Cisco Press chapter excerpt, learn ways to hide information in a network.
Cisco Press

Editor's note: This is an excerpt from Chapter 6 of "The Art of Network Architecture: Business-Driven Design" by Russ White and Denise Donohue and published by Cisco Press.

Whether you are hiding information horizontally or vertically, there are two types of information you can hide: topology and reachability. Figure 6-7 illustrates the difference. 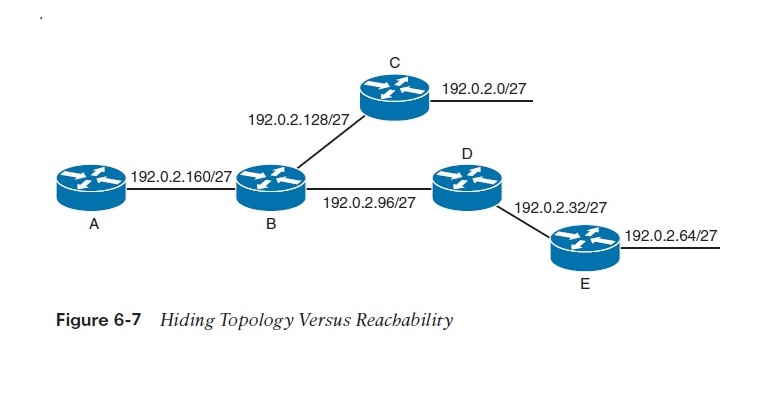 Assume this network is running a link state protocol; in normal operation, Router A has the following information in its table:

Let’s examine three possible ways of hiding information in this network, along with their results.

Aggregating topology information at Router B

What if Router B is configured to hide all the topology information it knows about from Router A? Router A’s database would contain the following:

Notice that the connections between each pair of routers to the right of Router B are no longer listed in the database; every destination (including the links between the routers) is still reachable, but Router A no longer knows the specific paths available to reach each one. Instead, Router A knows only that every destination is reachable through Router B and assumes Router B knows the more specific information required to reach them. Another way to look at this hiding of the topology is that Router A now believes every one of the destinations reachable to the right of Router B is directly connected to Router B itself, rather than through some multihop path that passes through Router B.

This is precisely the database Router A would have if this network were running a distance-vector protocol, or if Router B is configured as a flooding domain boundary in either OSPF or IS-IS.

Aggregating reachability information at Router B

What if Router B were configured to advertise the least amount of information possible while maintaining reachability to every destination on the network? In this network, all the addresses reachable via 192.0.2.0/27, 192.0.2.32/27, 192.0.2.64/27, and 192.0.2.96/27 could be represented by a single address, 192.0.2.0/25. If Router B advertises just the minimal number of routes that still preserves all reachability, Router A’s database would contain the following:

Filtering routing information at Router B

Finally, it is possible to hide information by filtering routing information at various edges in the network. Router B could be configured to filter all the transit links out of the network; the resulting database at Router A would be as follows:

Again, information about the topology to the right of Router B is not included in Router A’s database. This is because OSPF and IS-IS only allow routing information to be filtered at the same place topology information is aggregated—at a flooding domain boundary.

To provide a more specific example of these two within OSPF, consider the various forms of information hiding OSPF provides at an Area Border Router (ABR):

■ A summary LSA (type 3) contains all the reachability information, but summarizes the topology to make all the destinations within the area appear to be connected to the ABR itself.

■ A summary LSA (type 3) with route summarization configured contains only partial reachability information (some destinations have been hidden within the single summary route), and these summary destinations appear to be attached directly to the ABR, hiding topology information.

■ A type 3 filter removes some reachability information, hiding reachability while also hiding the topology information by making all the routes remaining in the type 3 appear to be attached to the ABR.

■ An area border LSA (type 4) exposes the actual attachment point within an area of a specific external route. Here the topology information within an area is exposed to those routers outside the area, reversing the effect of a summary LSA (type 3). 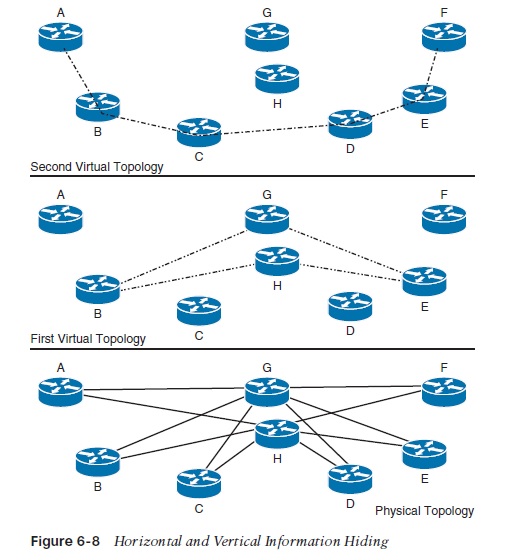 Figure 6-8 shows three networks; the bottom network is the physical topology of a small network. The network administrator can decide to hide information about Routers D, E, and F from Routers A, B, and C, either through route filters or routing aggregation, at Routers G and H. This introduces a hierarchy into the network that hides information horizontally across the network, or within a single topology.

Virtualization and hierarchy are both methods of hiding information in order to solve for specific problems, and they are both forms of modularization. What form of problem might require virtualization? Carrying the traffic of multiple organizations that do not want to (or cannot) interconnect on the same physical infrastructure is a common use case. Carrying traffic that must be securely transported alongside traffic that doesn’t need to be secured on a single physical infrastructure is another.