Learn the basics of NS-OX in this book excerpt on Cisco's operating system for Nexus data center switching.
Cisco Press

If you're in the market for Cisco Nexus switches or already supporting Nexus in your data center environment, you'll need to get up to speed on the networking operating system NX-OS.

This chapter, Introduction to Cisco NX-OS, from the book NX-OS and Cisco Nexus Switching by Ron Fuller, David Jansen, and Matthew McPherson, provides an introduction and overview of NX-OS and a comparison between traditional IOS and NX-OS conï¬gurations and terminology. It also covers NX-OS user modes, management interfaces, and system file management. 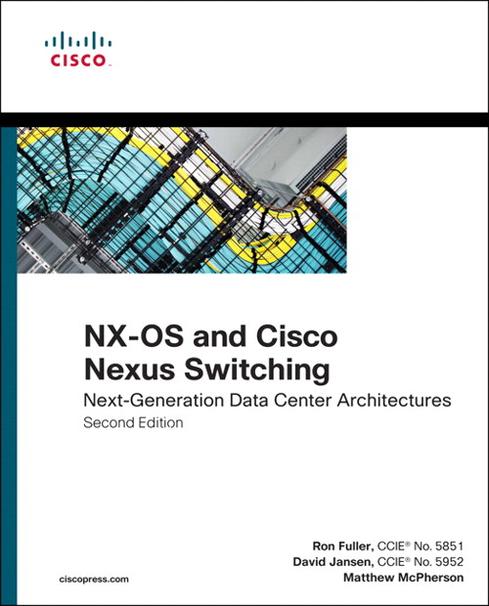 The self-healing and highly modular design of Cisco NX-OS enables for operational excellence, increasing the service levels and enabling exceptional operational flexibility. Several advantages of Cisco NX-OS include the following:

Virtual Port Channels (vPCs): Enables a server or switch to use an EtherChannel across two upstream switches without an STP-blocked port to enable use of all available uplink bandwidth.

Continuous system operation: Maintenance, upgrades, and software certification can be performed without service interruptions because of the modular nature of NX-OS and features such as In-Service Software Upgrade (ISSU) and the capability for processes to restart dynamically.

FabricPath: Enables each device to build an overall view of the topology; this is similar to other link state routing protocols. Each device in the FabricPath topology is identified by a switch-id. The Layer 2 forwarding tables are built based on reachability to each switch-id, not by the MAC address. Eliminates spanning-tree to maximize network bandwidth and flexibility in topological configurations, as well as simplify operational support and configuration. This enables a tremendous amount of flexibility on the topology because you can now build FabricPath topologies for Layer 2-based networks the same as for Layer 3-based networks.

>> For more on NX-OS, read the full chapter here.

>> Then see our book review or buy the book at the Cisco Press store. Network Computing members can use code NWC2014Â for 35% off through December 31, 2014.