Can Converged Infrastructure Help IT Get Its Mojo Back?

Traditional IT organizations are getting pushed aside by nimbler cloud providers. Converged and hyperconverged infrastructure can be the key to IT transformation.
Colm Keegan

In "Star Wars Episode V, The Empire Strikes Back,” Yoda implores an impetuous Luke Skywalker to”unlearn what you have learned.” IT administrators who wish to stay relevant in a shadow IT universe, may want to heed the words of the legendary Jedi master.

We keep hearing from all corners of the industry that IT needs to transform, but what does that really mean? Organizations can’t transform unless people are willing to change -- therein lies the rub. Many IT professionals have made very good careers out of specializing in a specific IT niche like storage, server or network administration.

The challenge is that by operating in infrastructure silos, traditional IT organizations typically can’t move with the same speed and agility as their more nimble cloud services counterparts. This lack of speed or responsiveness to real-time business demands has compelled many end users, particularly application developers, to seek alternatives in the cloud. With the swipe of a credit card, there is a virtually unlimited amount of server compute, storage and networking that can be instantaneously dialed up via the likes of AWS, Google, Azure, and Rackspace.

So how can IT get its mojo back? 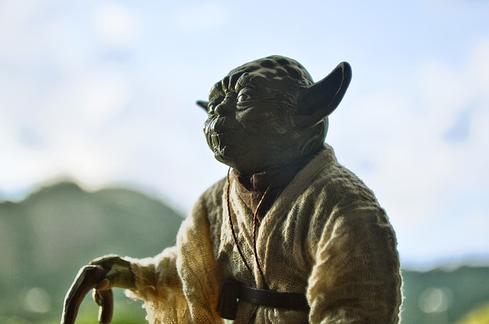 Here's where IT should follow Yoda's advice. Provisioning IT resources via a box-by-box siloed approach simply doesn’t cut it any more. It’s too slow, inefficient and often an impediment to innovation.

One way to cut through the morass of slow stovepipes of siloed infrastructure is to consolidate or unify disparate pools of server compute, storage and networking resources into a single system. Called converged and hyperconverged infrastructure, these platforms provide a tightly integrated stack of virtualized resources that can be rapidly provisioned on-demand. Examples include products from VCE (Vblock), SimpliVity, Nutanix, and VMware (EVO:RAIL).

More than half of the nearly 100 respondents to a recent ESG survey of converged and hyperconverged technology adopters cited ease of management, faster deployment times, and improved service and support as key benefits of their converged and hyper converged infrastructure deployments. In addition, 43% reported an improved total cost of ownership.

1. Infrastructure inefficiency. According to ESG research, most organizations spend 62% of their annual IT budget on maintaining existing systems. That only leaves 38% of the budget for innovation. More silos of stuff usually require more management, which translates into higher operational costs. And if resources can't be easily shared and reallocated as needed, there could be needless waste that over time contributes to higher capital expenditures.

2. Slow responsiveness. The time it takes for each infrastructure group to do its piece (server, storage, networking) can sometimes take days (at best) or weeks to turn around a production-ready environment. Slow IT is what has drove end users and developers to adopt public cloud services. Consolidating infrastructure management through converged and hyperconverged platforms can dramatically reduce resource provisioning cycles, and allow IT to be more responsive to the needs of the business.

3. IT as a-cost center. IT is often viewed as being a cost center rather than a strategic arm of the business. To change this perception, IT organizations need to morph from being caretakers of infrastructure to technology innovators that can help enable new business initiatives like data mobility, big-data analytics, and data monetization. By driving more automation into day-to-day management tasks, IT personnel can focus more of their time on business innovation and start changing the nature of their relationship with their business leadership.

While converged and hyperconverged infrastructure isn’t a silver bullet, cure-all for IT, it can serve as an agent of change for enabling IT transformation. Both from an IT services delivery standpoint and perhaps more importantly, by getting IT administrators to think outside of their siloed infrastructure boxes.