Several factors will speed adoption of the new Ethernet specification in the data center.
Kevin Deierling

Industry analysts, including Alan Weckel of Dell’Oro Group, have predicted that the adoption of 25 and 50 Gigabit Ethernet will be the fastest ever for a new networking technology. Oftentimes, such analyst predictions prove to be overly optimistic and the actual adoption of new speeds is slower than predicted. This is what I call the “shift right problem;” however, in this case, I think the analysts have gotten it correct. 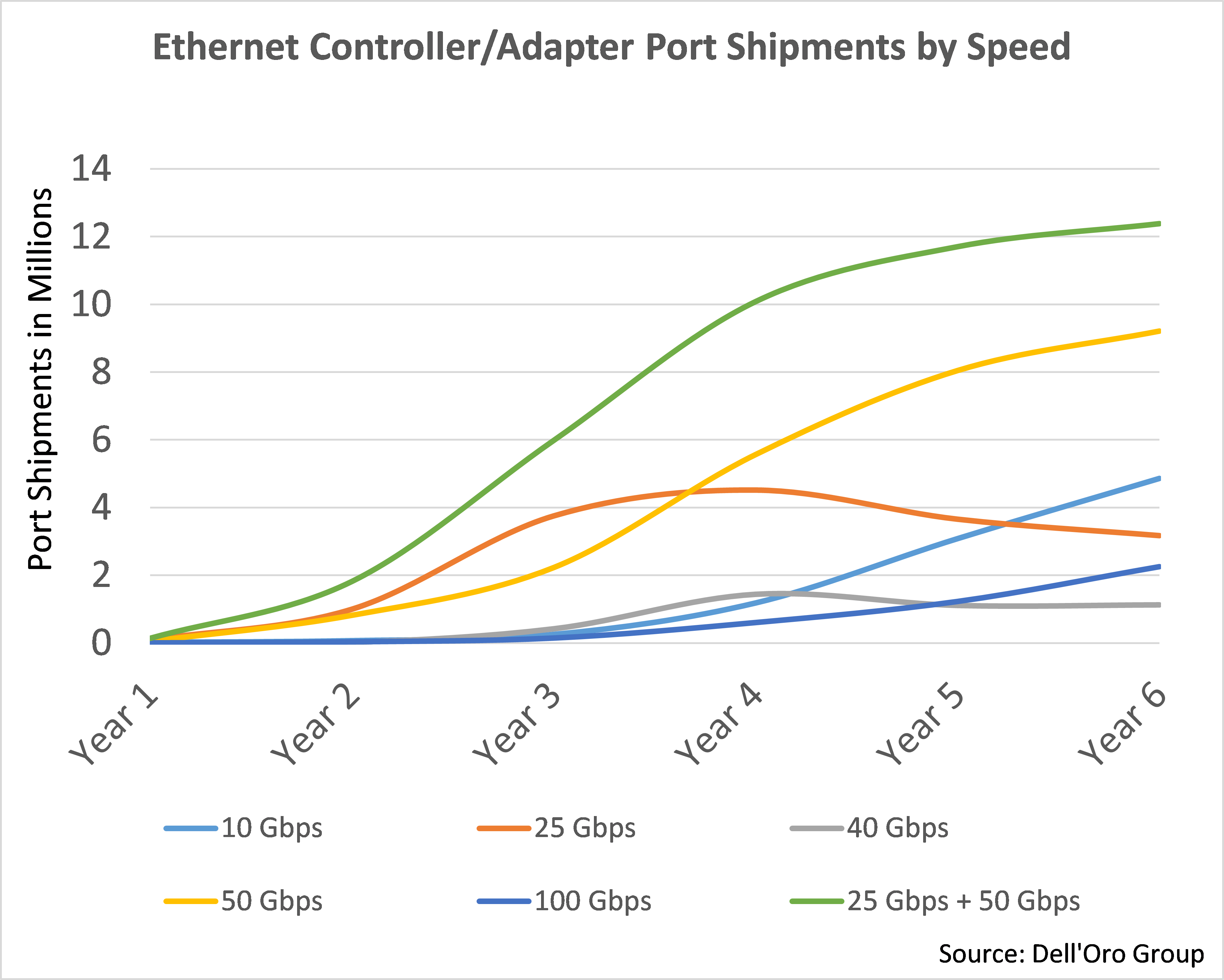 Here are the top three reasons why I think the 25 GbE predictions are right on the mark.

Backwards compatibility and ease of adoption

Backwards compatibility is critical for any new technology to be widely adopted. Fortunately 25 GbE is fully backwards compatible with 10 GbE environments, and offers a seamless upgrade. This means that enterprises can freely mix and match 10 GbE and 25 GbE switches and adapters, which will auto-negotiate to the lowest common speed. This backwards compatibility also means that the same fiber cabling that has already been deployed in the data center for 10 GbE can be reused.

Moreover, 25 GbE is not just backwards compatible, but has been designed with a mind towards forward compatibility as well. The 25G Ethernet Consortium that defined the specification also defined a 50 GbE version of the standard that simply bonds together 2 x 25 Gbps lanes into a single 50 Gbps link. So products that support dual ports of 25 Gbps can also be used to support 50 Gbps connections as well. Similarly, the 100 Gbps links are just four 25 Gbps lanes that are bonded together into a single connection and can use the readily available industry standard QSFP connectors, modules and existing parallel fiber.

In addition to being backwards compatible, the technology is now becoming readily available, with major server vendors including Dell, HPE, and Lenovo now offering standup and mezzanine 25 GbE adapters across a broad range of servers. In addition, many 25 GbE, 50 GbE, and 100 GbE switches are becoming available, including open networking platforms.

Ask any IT manager if he or she wants to future-proof the data center infrastructure with the latest speeds of networking gear and the answer will be: “Absolutely.” Now explain that to future-proof the network it will cost 3-4X more and the answer will shift to: “Not so fast. I can’t afford that level of investment for something I may not use right away.” Such is the dilemma that confronted IT architects in the past when they considered upgrading from 1 GbE to 10 GbE.

Fortunately, the upgrade from 10 GbE to 25 GbE has changed the math for enterprise cloud architects. Instead of a 3X or 4X price premium, 25 GbE is price competitive with only a modest premium over 10 GbE Ethernet for 2.5X the performance.

The rise of the hyperscale architecture is central to 25 GbE adoption and achieving pricing parity with 10 GbE. In the past there was a chicken-or-egg problem for the migration to a new technology: Achieving low prices required the economies of scale of high-volume production, but achieving high volumes required low prices. Historically, this problem greatly slowed the adoption of new technologies such as 10 GbE. Only innovators and early adopters were willing to pay the high prices associated with a new product. As volumes slowly increase, the pricing slowly comes down. At some point, the pricing and technology reaches a tipping point where mass adoption can become mainstream.

This changed with the rise of very large hyperscale providers. In the past, it took a huge number of medium-sized enterprises to drive volume, but today it only takes a couple of these hyperscale giants to adopt a new technology in order to achieve high volume production. You just need to look at the ramp of 40 GbE adapter ports to see the impact that a couple of these cloud-scale companies can make: 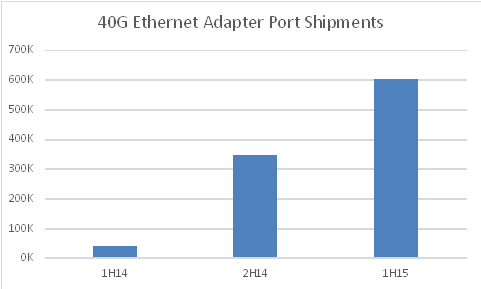 Volumes went from less than 10K ports per month to more than a million ports a year run rate in less than a year. This type of meteoric ramp allows vendors -- assuming they are able to meet the demand -- to quickly achieve the economies of scale needed to achieve competitive pricing with the previous generation of technology.

There are strong indications that this same story will playout once again with several hyperscale providers expected to roll out 25 GbE and 50 GbE data centers in the second half of 2016.

Analysts have predicted an unprecedented adoption rate of 25 GbE technology,  driven by higher core counts in CPUs, massive increases in data, sophisticated analytics workloads, faster Flash storage, and insatiable demand for bandwidth. But making analyst predictions a reality also requires backwards compatibility, price competitiveness, and high-volume manufacturing. In this specific case, all three of these elements have aligned, creating a perfect storm that will fuel the unprecedented growth of 25 GbE.