When the hubbub around SDN and then DevOps began to grow loud enough to elicit a response, the response from the network side of the IT house was somewhat expected. As is often the case when automation is mentioned, there were rumblings that both technologies were going to result in deep reductions in networking staff.

But that’s not come to pass, nor is it likely to. That’s because IT has a talent shortage -- yes, all of IT. Though security is most often highlighted as suffering a skills shortage, every silo in IT seems to be struggling to find the talent needed to fuel business growth.

According to a Cisco report, The Global Talent Competitiveness Index 2014, the shortage of skilled IP networking professionals will be at least 1.2 million people in 2015. "The common trend across all regions in the analysis is that demand for employees skilled in IP networking far exceeds the available supply," the report notes.

The shortage can be seen in incredibly low unemployment rates across job roles in the industry: Network architects and admins, developers and supporting techs, according to staffing firm Robert Half:

So it’s somewhat easy to understand why CIOs would lament the lack of skilled professionals available to fill the holes rapidly opening up across their organizations. Consider, for example, the growth over one year in the median engineer to device ratio across all size organizations. 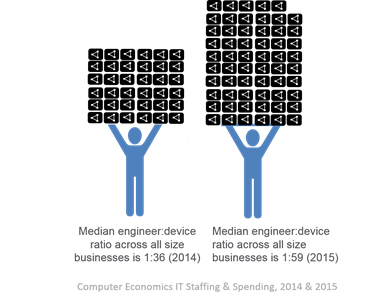 Even assuming smaller growth rates, that’s an astonishing rate at which to pile on the responsibility for managing devices on a single engineer. But if the network doesn’t grow, it’s never going to be able to withstand the coming deluge of data and things and applications that require it. It won’t be able to perform up to consumer or corporate user expectations, which in turn degrades the productivity and profit (for which those apps are being developed, deployed, and delivered) of the entire organization.

Operationalize the network. Apply DevOps to network operations. Treat infrastructure devices like code and automate and orchestrate as much as possible. Consider SDN. Consider SDDC or plain-old-automation, but consider something -- and do it soon.

Contemplate it not just to ensure your networking staff can keep up with the growth, but as a means to potentially lift the burden enough that they can mentor and train new staff that might not be skilled in all the networking nuances, but could become skilled, given the right opportunity. With experienced networking professionals already in the organization, it’s possible to augment staff by training them up rather than hiring from what appears to be a dwindling if not non-existent pool of experienced network engineers.

But existing staff can’t mentor and manage the network manually at the same time. They need help from somewhere and that somewhere is automation and orchestration.