The Changing Role Of The Network Engineer

Interop puts spotlight on how the job of a networking pro is evolving as software takes center stage.
Marcia Savage

The rise of software-defined networking, network automation, and DevOps has led to much speculation about the future of the network engineer and how the job might change. Interop 2016 offered a couple perspectives on the future role of networking pros and what they should focus on moving forward.

In his session with the provocative title, "The 'Network Revolution' Is A Lie," network software developer Matt Oswalt said that while SDN and network automation are often described as shaking up the networking industry, the result hasn't been what network pros wanted, which was simple tools to manage networks more efficiently.

"We wanted to be able to do this in a way we could control with open platforms and APIs. Instead, we got the product wars and the introduction of platforms that 'solved all of our problems' despite our never asking for that," said Oswalt, author of the Keeping It Classless blog and known on Twitter as Mierdin.

There is a less-publicized revolution happening in networking, which is more about people than technology, he said. "We rely way too much on the technology side of this equation. We're trying to solve people and process problems with technology."

To that end, organizations should invest more in people by educating them about what they can do to drive their operations forward and "empowering them to be builders if they want to be," Oswalt told attendees. He cited training in fundamentals such as understanding what algorithms are and how Linux works.

"It's not an academic exercise. These fundamentals are below every piece of technology we touch," he added. "If you focus on the fundamentals, we're all really smart people. If you invest time, there it will make your career explode." 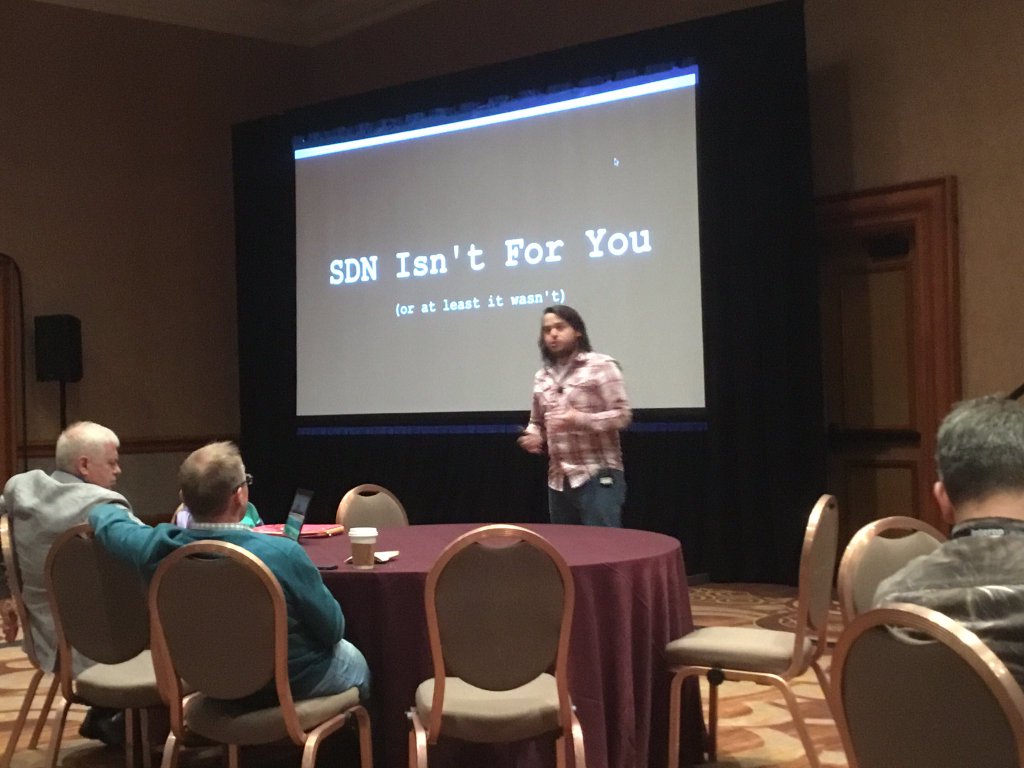 At the same time, he advised not discounting SDN or thinking that open networking is only for huge Internet companies like Facebook and Google. Oswalt also said his intention wasn't to bash networking vendors; he sees them beginning to implement better APIs on their technology and offer tools that aren't locked into a huge proprietary platform. APIs need to be well documented in order to be effective, he noted.

Oswalt sees plenty of room in networking for developers and non-developers, and told the audience of network pros "no one is telling you to become a software developer. Writing a Python script to solve a problem doesn't mean you are no longer a network engineer."

He suggested writing a Python script to automate the most redundant part of a job, which allows a networking pro to take better control of the infrastructure.

Oswalt said there's a perception that running Linux on a switch is just for big data centers at Google and that open source code is less stable than proprietary platforms, which he doesn’t understand. "We need to learn how to take advantage of open source, not be scared of open source. …It does require more testing. It takes work; you will have to invest time in this, but you will gain control."

Return of the generalist

Earlier in the day, Will Murrell, a senior network engineer, led a session with an equally provocative title: "Death of the Network Specialist." He explained that he doesn’t mean there will be no place for specialists -- in fact, there will always be a place for network specialists, especially in areas such as wireless.

However, he sees a shift happening where the specialty is having a breadth in knowledge in several areas of IT. The IT departments that have grown up over the years into silos are changing as new technologies like SDN, virtualization and cloud are streamlining IT management and reducing resource needs, he said.

"There's a fundamental shift is how we approach being an engineer. There's a radical new thing called learning," Murrell said. "We need to change our way of thinking. Sometimes when we're doing something the same way, it can be difficult to change…We need to rethink the way the IT department is put together and our role in it."

He predicted the future will bring deep levels of specialization in multiple areas, with each area building on the other.

Skills that network engineers should focus on, in addition to routing and switching, include security, systems, storage, and programming, Murrell suggested. "Everything should be approached from a security mindset," he said.