When I wrote about Globalstar's TLPS late last year, some in the wireless industry were expressing serious concerns up about the company's proposal. Since then, more WLAN industry critics have lined up against the channel 14 offering, challenging the merits of simply adding a private, company-controlled channel to the 2.4 GHz space, which most of us consider a lesser WiFi player when compared to 5 GHz.

As a reminder, 5 GHz has or is soon to get dozens of channels, and is where 802.11ac and the fastest, most robust wireless offerings are found. The 2.4 GHz space is far from dead, but it’s losing market share  as more client devices are equipped with dual-band adapters and the greater WiFi world is increasingly about shorter range, higher density deployments.

Now, back to Globalstar and its TLPS, which stands for terrestrial low power service.

Globalstar recently showed off its channel-14 based TLPS service in a demonstration at  Federal Communications Commission (FCC) facilities. The company intended to prove that TLPS doesn’t interfere with adjacent WiFi channels (primarily channel 11) and has no impact on Bluetooth or Bluetooth Low Energy (BLE) systems. Globalstar is calling the demonstration a resounding success that proves TLPS is a good WiFi neighbor. 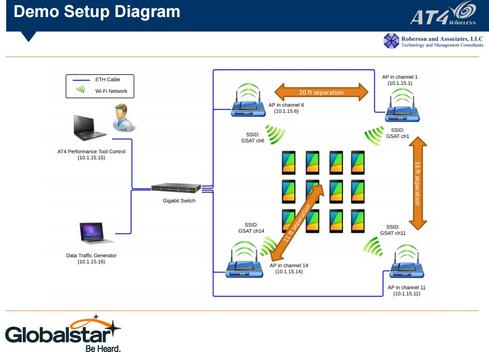 But the demo did nothing to quell TLPS skepticism, and in fact fueled more debate. Some of these concerns are of a technical nature, while others have to do with Globalstar’s marketing of TLPS to media and investors who may not be very tech savvy.

On the technical side, Globalstar has partnered with Ruckus Wireless for TLPS. Ruckus has been pretty quiet about its involvement, despite having well-known wireless experts who frequently blog and write about WiFi. So far, TLPS has only been demonstrated with Ruckus hardware, and some skeptics say the demonstration’s glowing results in not interfering with channel 11 are attributable to Ruckus’ superior interference rejection. They question whether using another vendor’s hardware would cast TLPS in such a flattering light.

For the demonstration, no real test plan was made public that would typically show how each access point was configured to include data rates and features that may have been enabled or disabled. In my opinion, demonstrating  non-Ruckus hardware and providing full transparency in test parameters would have gone a long way in silencing the inevitable criticism.

The Bluetooth Special Interest Group (SIG) found its own faults with the demonstration, claiming that TLPS very much impacted Bluetooth Smart Lighting and Hearing Aids and has filed initial concerns with the FCC with more promised.

As a WLAN architect and technologist, my biggest beef with TLPS is the way it’s being spun. If the technology proves itself in legitimate testing and can play nice, then any additional spectrum would be welcomed to the WiFi party. Even if TLPS lands in some niche application (Amazon’s ebook delivery service has been mentioned as one possibility), it will benefit customers.

But to what degree it can help with mainstream WiFi is certainly fodder for debate. Globalstar has talked about giving TLPS to schools and libraries if approved, but a slew of channel 14 cells under one roof is no better than any other single channel gaggle of APs that interfere with each other.  In the TLPS model proposed so far, other vendors are not allowed to start using channel 14 -- it belongs to Globalstar.

Moreover, Globalstar has become fond of touting how TLPS will “increase WiFi capacity in the U.S by one-third” and makes similarly worded claims that essentially deny the existence of 5 GHz spectrum in WiFi.

In my big WLAN, I frequently see no more than half of around twenty-thousand users on 2.4 GHz. At times, the 5 GHz share swells to well over 65%, reflecting the latest generation of wireless client devices on a dual-band network (and yes, I’m in the U.S.). My own benefit from an approved TLPS would be zero unless Cisco were allowed access to channel 14, and then only a quarter of my 2.4 GHz users --  or one-eighth of all of my users --  would likely see benefit.

I’m all for evolution, and the WiFi paradigm has to get shaken up now and then. But TLPS needs to become a whole lot more transparent and far less hype-fueled to have a shot of winning over the rest of the wireless world.