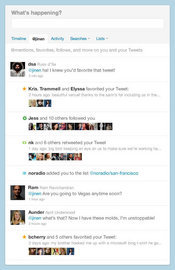 Two days after announcing that all of the social network's users now have access to its "new" (actually about a year old, but rolled out gradually) Web interface, Twitter has unveiled two new tabs that will make it easier for users to navigate their social sphere and discover new content. Meanwhile, and more significantly, Twitter has launched its own photo-sharing feature, potentially undercutting third-party services.

On the Twitter Blog, the San Francisco-based company offers a look at two new tabs, which are not yet available to all users. The first of the new tabs is an @username tab (where "username" is replaced by the user's actual username). It shows you which of your tweets have been set as favorites by other users and which have been retweeted. It also shows you any replies (tweets that include your username) and lists any new followers you've acquired.

The second of the two new tabs is labeled Activity, and it's designed to aggregate noteworthy new tweets, retweets, and favorites from your social network. This feature creates a Facebook-like stream of not just the most recent content, but that which may have the most relevance to you. While it's not yet clear how well that Activity tab delivers the most useful content, we'll undoubtedly get a chance to evaluate its functionality as the new feature rolls out across Twitter's entire user base.

These two tabs replace two existing tabs on the Twitter Web interface. When users receive the new tabs on their profile, the @Mentions and Retweets tabs will vanish. The functions of these older tabs are replaced entirely by the new @username and Activity tabs.

Perhaps more significant than the addition of these new tabs is the launch of Twitter's own photo-sharing feature provided in partnership with Photobucket. Web users will now have the ability to add a photo to a tweet without relying on third-party services such as Twitpic or yfrog. Instead, you can simply click the camera icon under the What's Happening box to add an image. Images then appear as links in a tweet, with the link pointing to a separate page with the image embedded below the text of the tweet.

While hardly revolutionary in their own right, the addition of these new features may indicate that Twitter is stepping up its efforts to compete with Facebook and stay ahead of Google+, which has already grown to more than 25 million accounts.

Attend Enterprise 2.0 Santa Clara, Nov. 14-17, 2011, and learn how to drive business value with collaboration, with an emphasis on how real customers are using social software to enable more productive workforces and to be more responsive and engaged with customers and business partners. Register today and save 30% off conference passes, or get a free expo pass with priority code CPHCES02. Find out more and register.