SDN Is Business, OpenFlow Is Technology

Many people don't understand the difference between OpenFlow and software-defined networking (SDN). This isn't surprising because the two technologies are closely related. However, they aren't interchangeable. OpenFlow is protocol that configures network switches using a process like an API. SDN is a term that describes providing programmable interfaces within a network infrastructure to enable a high degree of automation in provisioning network services. The SDN term is being abused by marketers who want to apply it to a wide range of technologies.

In fact, SDN can be explicitly defined. There are three architectural layers to an SDN network: the physical network, the SDN applications and the SDN controller. Let's look at each.

SDN Applications. The most visible layer in an SDN design is the applications that deliver services, such as switch/network virtualization, firewalls and flow balancers. (Note that OpenFlow-based load balancers are called flow balancers. They aren't traditional load balancers because they can't read packet contents.) These applications are similar to or the same as those in use today where the software runs on dedicated hardware. Most of the coming innovation in networking will occur in SDN applications.

SDN Controller. The SDN controller is the middleware that serves as the linchpin of the entire architecture. The controller must integrate with all the physical and virtual devices in the network. The controller abstracts the physical network devices from the SDN software that works with those devices. There is a high degree of integration between the controller and network devices. In an OpenFlow environment, the controller will use the OpenFlow protocol and the NETCONF protocol to communicate with switches. (OpenFlow is the API for sending flow data to the switch, and NETCONF is the network configuration API). 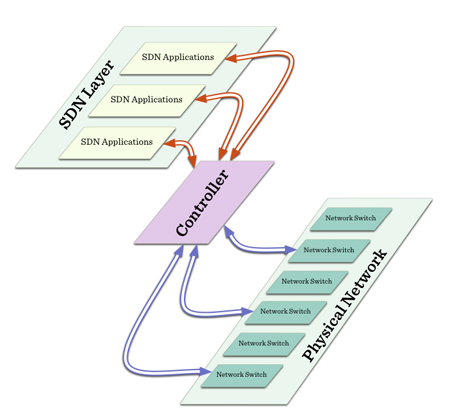 Clearly the controller is a key element in the network architecture. It must present APIs to the applications that represents usable functions, and it's here that the battle for SDN dominance will be fiercest among the vendors.

An SDN architecture has two distinct networking APIs: northbound and southbound. OpenFlow is a southbound API. OpenFlow describes an industry-standard API that configures the frame-forwarding silicon in an Ethernet switch and defines the flow path through a network. In addition, the Open Networking Foundation (ONF), the standards body overseeing the OpenFlow protocol, announced an API for device configuration called OF-CONFIG. OF-CONFIG uses the NETCONF XML data format to define the language.

Cisco's OnePK is also a southbound API. There is much discussion around whether OpenFlow is enough to meet all the needs of networking, especially with regards to migrating from a packet-based network to a flow-based network. There are unresolved issues that will hinder that migration, such as the need for interoperability with existing protocols such as STP and OSPF. 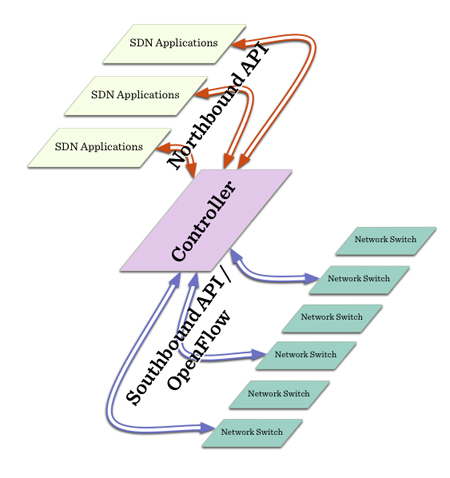 The northbound API provides a mechanism in an SDN architecture to present services or applications to the business. Each application will develop a view of the flow tables for network devices and then send requests to the controller for distribution to the network devices.

For example, a virtual switching application would build a network graph/database of all points in the network of physical and virtual switches. In a multitenant Ethernet network, the app would develop a set of flow rules that emulate Ethernet VLANs while maintaining full isolation for each tenant's flows. The flow rules would consist of values based on ingress and egress ports, plus the source and destination MAC address.