Network overlays dramatically increase the number of virtual subnets that can be created on a physical network, which in turn supports multitenancy and virtualization features such as VM mobility, and can speed configuration of new or existing services. We’ll look at how network overlays work and examine pros and cons.
Joe Onisick

While network overlays are not a new concept, they have come back into the limelight, thanks to drivers brought on by large-scale virtualization. Several standards have been proposed to enable virtual networks to be layered over a physical network infrastructure: VXLAN, NVGRE, and SST. While each proposed standard uses different encapsulation techniques to solve current network limitations, they share some similarities. Let's look at how network overlays work in general.

Many advanced virtualization features require Layer 2 adjacency, which is the ability to exist in the same Ethernet broadcast domain. This requirement can cause broadcast domains to grow to unmanageable sizes. Prior to virtualization, network designs emphasized shrinking broadcast domains as much as possible and routing to the edge wherever possible. That's because routing is extremely scalable, and routing to the edge can improve path utilization and alleviate dependence on Spanning Tree for loop prevention.

Now virtualization is forcing broadcast domains to grow, in part to enable features such as VM mobility. One way to do this is through the use of VLANs. The 802.1q standard defines the VLAN tag as a 12-bit space, providing for a max of 4,096 VLANs (actual implementation mileage will vary.) This is an easily reachable ceiling in multitenant environments where multiple internal or external customers will request multiple subnets.

All three proposed network overlay standards solve the scale issue by providing a much larger Virtual Network ID (VNID) space in the encapsulating packet. NVGRE and VXLAN are designed to be implemented in hardware and use a 24-bit VNID tag, which allows for 16 million virtual networks. STT uses a larger 32-bit ID. This provides for more space but would be more expensive to implement in hardware, where increased address size incurs additional cost for implementation in silicon.

A need for flexibility in the data center also opens the door to network overlays. That is, the data center network needs to be flexible enough to support workloads that can move from one host to another on short notice, and for new services to be deployed rapidly.

VMs in a data center can migrate across physical servers for a variety of reasons, including a host failure or the need to distribute workloads. These moves traditionally require identical configuration of all network devices attached to clustered hosts. There is also a requirement for common configuration of upstream connecting switches in the form of VLAN trunking, and so on.

Network engineers and administrators face the same problem whether they are deploying new services or updating old ones--namely, the need to configure the network. Much of this work is manual, which limits scalability and flexibility and increases administrative overhead.

These techniques provide massively scalable virtual network overlays on top of existing IP infrastructures. One of the keys to the technique is the removal of the dependence on underlying infrastructure configuration; as long as IP connectivity is available, the virtual networks operate. Additionally, all three techniques are transparent to the workload itself; the encapsulation is done behind the scenes so it is application independent.

From a high-level perspective, all three proposed standards operate in the same way. Endpoints are assigned to a virtual network via a Virtual Network ID (VNID). These endpoints will belong to that virtual network regardless of their location on the underlying physical IP network.

In diagram 1 there are four virtual hosts connected via an IP network. Each host contains a Virtual End Point (VEP), which is a virtual switch capable of acting as the encapsulation/de-encapsulation point for the virtual networks (VNIDs.) Each host has two or more VNIDs operating on it and each workload assigned to a given VNID can communicate with other workloads in the same VNID, while maintaining separation from workloads in other VNIDs on the same or other hosts. Depending on the chosen encapsulation and configuration method, hosts that do not contain a given VNID will either never see packets destined for that VNID, or will see them and drop them at ingress. This ensures the separation of tenant traffic. 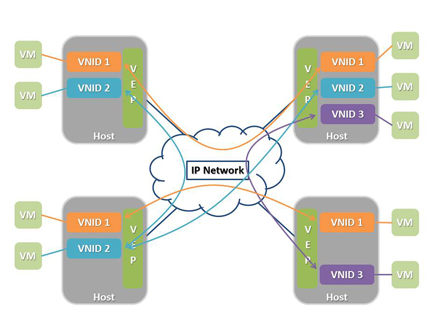 Diagram 1 focuses on virtual workloads running in VMs. The same concept would apply if using a physical switch with the VEP functionality. This would allow physical devices to be connected to the overlay network as pictured in Diagram 2 below. 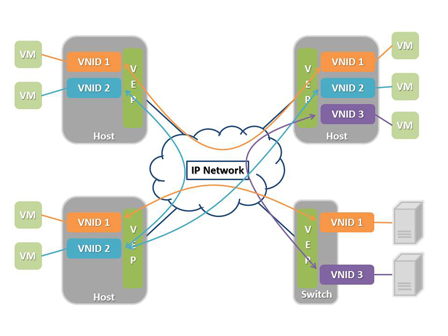 With a physical switch capable of acting as the tunnel end-point, you can add both physical servers and appliances (firewalls, load balancers, and so on) to the overlay. This model is key to a cohesive deployment in mixed workload environments common in today's data centers.