Startup Crossbar bets on resistive random-access memory in the race to find a replacement for flash storage.
Howard Marks

Flash occupies a unique position in the history of storage. Just as we’re getting a good handle on how to take full advantage of the stuff, people are already saying we have just a few years before the chip boffins will have shrunk flash as much as they can and we’ll have to find a replacement. The folks at Crossbar have their money on resistive random-access memory (RRAM).

Like several contenders in the nonvolatile memory market, Crossbar uses elements that store their ones and zeros as high and low resistance states rather than the trapped charge model that both DRAM and flash use. Compared to NAND flash, or a technology like PCM (phase-change memory), the Crossbar RRAM cell looks satisfyingly simple.

Each cell is made up of a proprietary amorphous silicon switching medium between a pair of electrodes. When a current is applied to the cell in one direction, silver ions from the top electrodes migrate into the switching medium. When the migrated silver creates a nanoscale filament between the two electrodes, the resistance of the cell falls dramatically. To erase, the current is reversed and the silver migrates back to the top electrode, increasing the resistance. 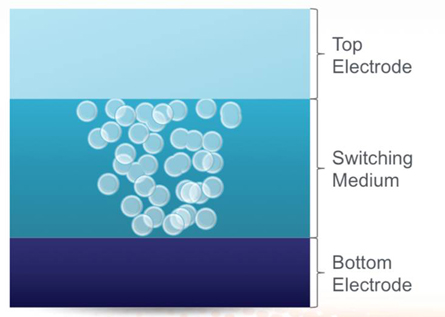 Write voltage is about 3.5v for the current devices, compared to the 20v or higher erase voltages required by flash. This means RRAM uses just 1/20th the power of flash.

That structure means that RRAM is actually bit addressable, like DRAM, and Crossbar claims write times 20 times as fast as NAND flash with endurance of around 10,000 cycles. That’s three to 10 times the endurance of 1X (19-15nm) flash, and of course flash endurance will fall as vendors implement 1Y and 1Z (10nm) geometries. If controller vendors use the same extended ECC mechanisms they’re now developing for flash to RRAM, endurance shouldn’t be a problem. As long as a cell is large enough to support the creation of a filament, the process should be able to shrink and go 3D without the vastly increasing error rates that plague flash as it shrinks.

[2D NAND flash is fast reaching its limit but Howard Marks says a new 3D chip from Samsung is an encouraging development in flash memory's evolution. Read his analysis in "The Next Step For Flash: 3D."]

RRAM has a couple of other significant advantages over flash and some of the other "next big thing" contenders. First, it can be built on a standard CMOS fab line. This not only broadens the number of foundries that can produce it, but also means that vendors can put RRAM and logic on the same die for embedded applications. So we could see system on chip (SoC) devices with embedded RRAM in consumer electronics such as smartphones and home NASes, or single chip SSDs with controller and RRAM.

RRAM also takes less chip area at the same cell geometry than flash, about half as much, leading Crossroads to predict 1-Tbyte chips. 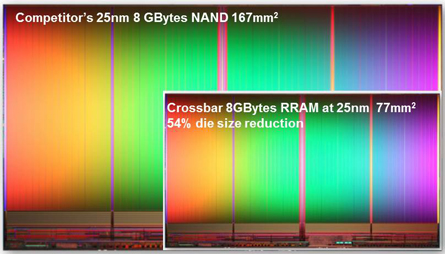 Crossbar has received roughly $25 million in funding from some major VC firms, and Kliener Perkins funded academic research into the technology before Crossbar’s founding in 2010

For Crossbar’s flavor of RRAM to take the lead in the race to replace flash, it will need to find someone, preferably with a CMOS foundry, to license its technology and bring it to market. It looks like a couple of today’s flash vendors are hedging their bets, perusing several alternatives simultaneously. Maybe one will pick RRAM, and in 2050 you can regale the younglings with tales of flash SSDs like I talk about bubble memory.

While we don’t yet know what technology will take over when flash runs its course, I for one sleep better knowing there are enough players developing alternatives to be confident there will be a replacement.