So far this year, solid-state drives have made great strides in size and speed while the prices continue to drop. Their inexorable march towards replacing hard drives continues and perhaps is quickening. Hard drives now no longer have any claims to being “first” in any category.

Let’s look at some recent SSD news. In the capacity race, Samsung is now shipping a 15.36 TB SSD, 50% larger than the biggest HDD. The new drive is in a 2.5” form factor, too. It uses second-generation 48-layer V-NAND chips coupled with die stacking to increase the per-package capacity to 512 GB. This is a SAS drive, but we can expect a SATA version down the road. 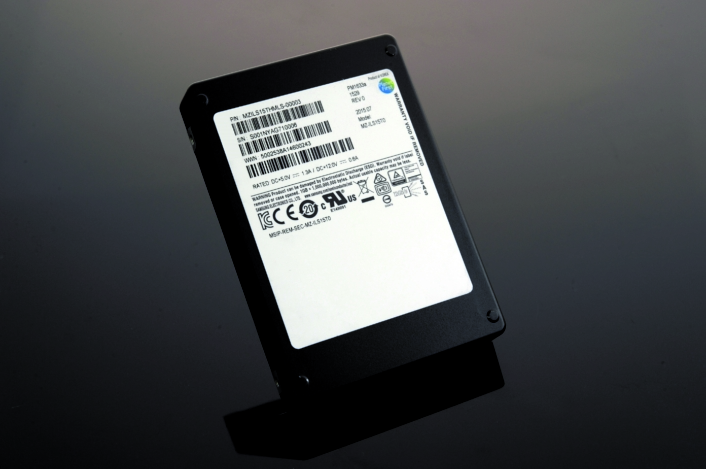 Jumbo SSDs like this are a major step in the replacement process for the hard drive. Other vendors will announce similar products later in the year, so surpassing hard drives is set to become the norm for the industry. We also can expect capacities for 3D-NAND SSDs to increase substantially over the next couple of years as the technology matures, with 30 TB drives likely in 2017 or 2018.

On the durability side, Samsung claims that the new drive achieves two to 10 times the write endurance of planar SATA drives, which, based on Google’s recent report, would mean that write endurance worries are a thing of the past. Google analyzed the error rates and failures on its SSDs over six years and found that expensive SLC drives are no more reliable than cheaper MLC drives and that SSDs are more reliable than hard drives. There are some differences in the way errors occur in SSDs, but these should be handled by data integrity methods such as RAID, erasure coding or replication.

SSDs are already blindingly fast compared with HDDs, but some new achievements push the records to new levels. E8, an Israeli storage startup, is claiming 10 million IOPS from a 2U box of NVMe drives. That pushes all-flash array performance records up by roughly 2.5 times. For raw speed, though, you can’t beat Seagate’s new flash card, which can pump 10 GB/sec through its 16-lane NVMe interface.

SATA SSDs typically rives achieve more leisurely 400K IOPS levels, but the combination of capacity and performance are compelling. One might ask why buying an enterprise hard drive is even worth considering, which raises the issue of price.

Looking at SSD pricing from the major appliance/array vendors, we find large markups on the SSD drives, and in fact these are quite a bit more than comparably sized hard drive markups. When we go to the Internet or distribution, things change. There, large capacity SATA SSDs are already cheaper than enterprise hard drives, while being much faster. Google’s analysis has debunked the myths that these drives can’t meet enterprise workloads, so this marks the first step in overall price parity for SSD.

Terabyte 6 GB SATA solid-state drives retail today for just under $300, but Dell carries a latest generation Samsung drive at just a little bit more. It’ll be interesting to see if the Dell price model translates over to EMC, currently listing a terabyte SSD at $14,000! Moreover, if you aren’t hung up on an exact terabyte, the 960 GB class drives cost about  $250  from many vendors. Clearly, as the market moves towards smaller, smarter appliances and open-source software like Ceph or OpenStack Swift, the price of storage is going to drop dramatically, while performance should improve.

With 3D NAND just entering the mainstream and set for several more major iterations in density, we can expect the price per terabyte to keep heading south. Are we on track for my goal of parity with SATA bulk drives? One counter argument is that NAND die capacity can’t keep up with the demand that would create. This is a complex issue that involves yields and die capacities, but it’s worth noting that currently there is a surplus of flash in the market, mainly as a result of the slowing IT economy, and this might provide some buffer on the production capacity issue while we wait for the construction of foundries.

With all the trends positive for SSDs, the future of the technology looks rosy. From laptops to servers and storage appliances, the speed and low power of SSDs mean healthy growth even with downturns in other areas of IT. An all-SSD future is now on the horizon.

As anyone who follows me on the Internet knows, I’m a strong believer in the total migration from enterprise hard drives to SSDs. I see no strong rationale today for staying with spinning rust, so I’m happy to challenge my readers to comment on why we need to stay with old, slow, expensive and unreliable technology!