Median salaries for networking and data center pros decreased this year, according to InformationWeek US IT Salary Survey.
Susan Fogarty

The tech job market is a fickle beast. Headlines scream of unending opportunity, encouraging anyone with a laptop to learn to code. Software startups are offering juicy perks like sign-on bonuses, gourmet lunches, and gym memberships to attract developers and sometimes entire development teams.

At the same time, commoditization is rearing its head in on the operations side of the house. The new professional ideal is the "full-stack engineer," one who is adept at everything from racking and stacking to automation scripting. The value placed on software skills and the trend toward technologies like cloud, software-defined and converged infrastructure has been pushing focus away from hardware, and infrastructure pros can now feel the effects where it hurts — in their paychecks.

This year's InformationWeek US IT Salary Survey found that median salaries for networking and data center professionals actually decreased this year, after seeing small gains in our 2014 survey. We polled 450 infrastructure-oriented IT pros with an average of 20 years of experience working in IT across varying company sizes and industries. Our largest vertical segments were healthcare at 9%, followed by financial services, consulting, education, and government — all at 8%.

Thirty-eight percent of respondents work in organizations with operating budgets between $1 million and $50 million, but 9% have budgets over $10 billion. A large percentage of respondents hold degrees at the bachelor's level or higher, totaling 62% for staff and 70% for management. Sadly, an overwhelming 91% of our survey takers were male and only 9% female. 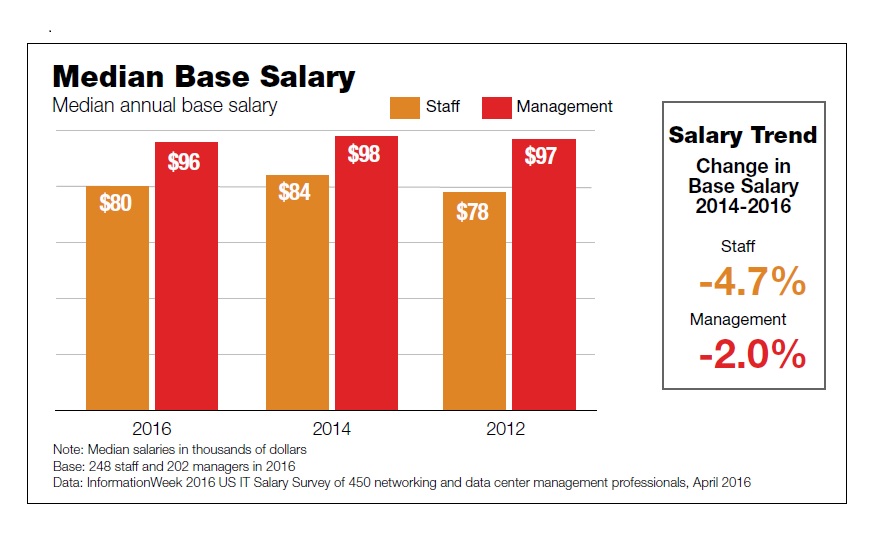 When it comes to compensation, staff-level employees reported median annual base salaries at $80,000, for a significant 4.7% decrease, compared to our results in 2014. Infrastructure managers fared better, reporting median annual base salaries of $96,000, for a 2% decline in the past two years. (See Figure 1.) That comes on the heels of several years with small increments of growth for staff positions and flat salaries for managers as the US economy began recovering in 2010 from the Great Recession.

The picture is not completely dreary, however. Our survey found that when you add bonuses and perks to the mix, overall compensation at least remained level with our last report. Total compensation for staff members in 2016 was exactly flat at $88,000, and total comp for managers increased 1.9% to $106,000. (See Figure 2.) The greatest number of bonuses were based on personal performance (53%), corporate performance (35%), and company profit sharing (22%). 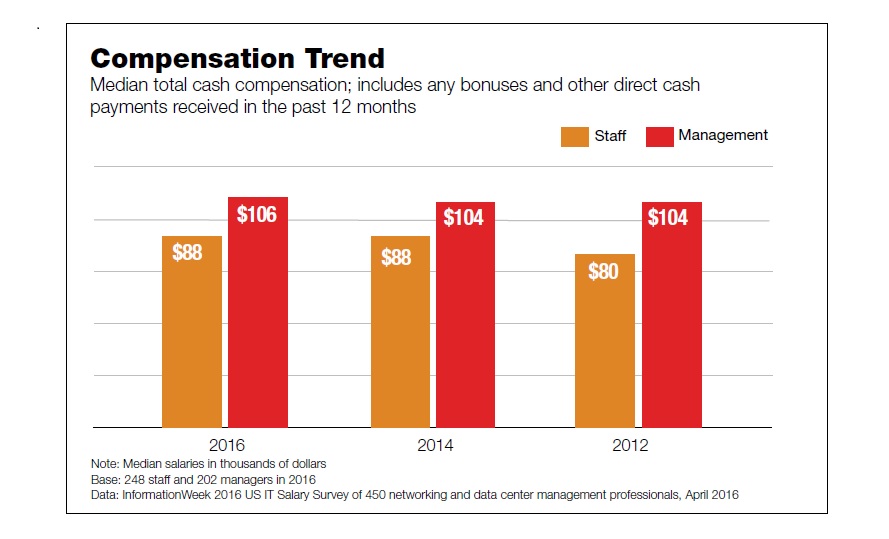 Many companies are looking at more creative ways to keep employees happy, noted survey respondent Jonathan Harris, network engineer at Northwest Pipe Company. "There seems to be greater focus on leveraging benefits to keep employees and draw talent to organizations. Two examples I have seen recently are expanded maternity leave and increased medical coverage," he said. "There is even a company in North Carolina that is giving a Tesla Model 3 to employees."

What else is causing salary stagnation? On a macro level, fewer new jobs are being created in infrastructure roles than in other areas of IT. According to the Bureau of Labor Statistics Occupational Outlook Handbook, 2016-17 Edition, average growth for the number of job titles it tracks for the period between 2014 and 2024 will be 7%. The BLS expects network and system administration positions to increase by 8%, just a tad higher than average. In contrast, software development jobs are projected to grow by 17%, information security by 18%, and data research analysts by a whopping 30%.

It comes down to simple supply and demand. "Job roles requiring experience with specific tools and architectures that are in low supply but high [in] demand are seeing salary increases," said a senior project manager at a major technology firm. "Cloud, mobile, DevOps, and security are generating the new job opportunities in IT." An IT manager who took the survey agreed, saying that his organization is rewarding security specialists and developers with higher salaries and bonuses, while roles like server administrators get small increases if any.