The trend toward technologies like cloud, software-defined and converged infrastructure is commoditizing roles for those who work in the field of infrastructure and trickling down into their pay. In fact, according to the InformationWeek US IT Salary Survey, median salaries for networking and data center professionals are actually decreasing.

The Bureau of Labor Statistics Occupational Outlook Handbook, 2016-17 Edition notes that while demand for network and sys admins will grow as businesses invest in "newer, faster technology and mobile networks," an increase in cloud computing could raise productivity — especially in the case of networking professionals. The resulting landscape would require fewer of them to do the same amount of work.

Our survey results illustrate that dynamic in some respect, although it's clear that the issues are complex, with many interdependencies. When asked how newer technologies and trends are affecting their workloads, infrastructure pros agreed that they have less work as a result of virtualization (chosen by 43%), consolidation (31%), converged infrastructure (23%), and cloud computing (22%). 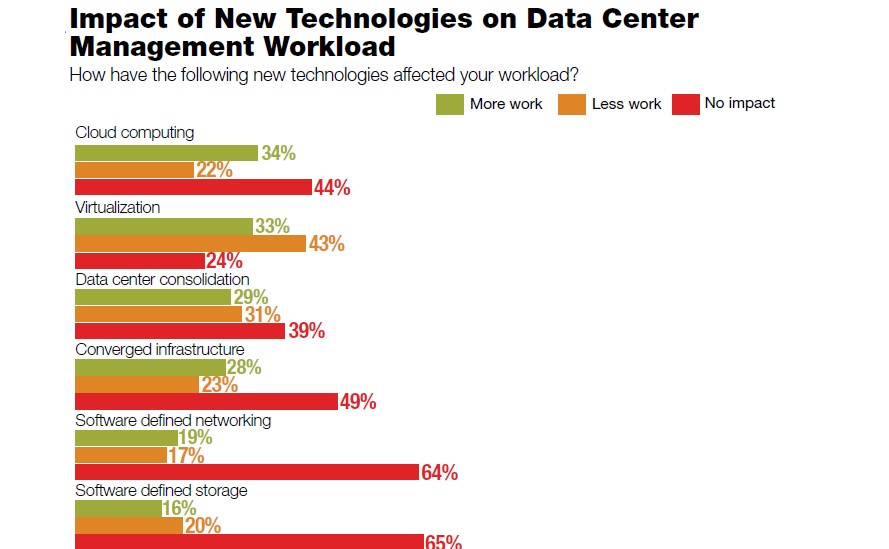 Yet even larger percentages said they have more work because of cloud computing and converged infrastructure, the choice of 34% and 28% of respondents, respectively. Many other technologies that we think of as saving work, such as software-defined networking, are creating as much work as they save, if not more, according to our respondents. That may reflect the complexity of integrating new these initiatives with existing infrastructure, or because new skills must be acquired to manage software-oriented and hybrid environments.

Despite all the advancements taking place in data center and networking technology, our survey showed that more traditional tasks are eating up a large part of infrastructure professionals' time on a daily basis. Although there is a lot of talk in the industry about "moving up the stack," three quarters of our respondents identified "managing network and systems infrastructure" as the skill most critical to their jobs.

Ensuring the corporate network is up and running is an ongoing challenge that shows no signs of abating, even as programmatic networks and automation creep into the picture. The networking professionals in our survey in both management and staff positions are mired in maintenance tasks rather than higher-level duties. In a typical workweek, they reported spending the largest part of their time on network troubleshooting (the answer of 23%), followed by network monitoring (22%) and network security (19%). Network design was cited by 14%, and deploying new network services came in at only 8%. 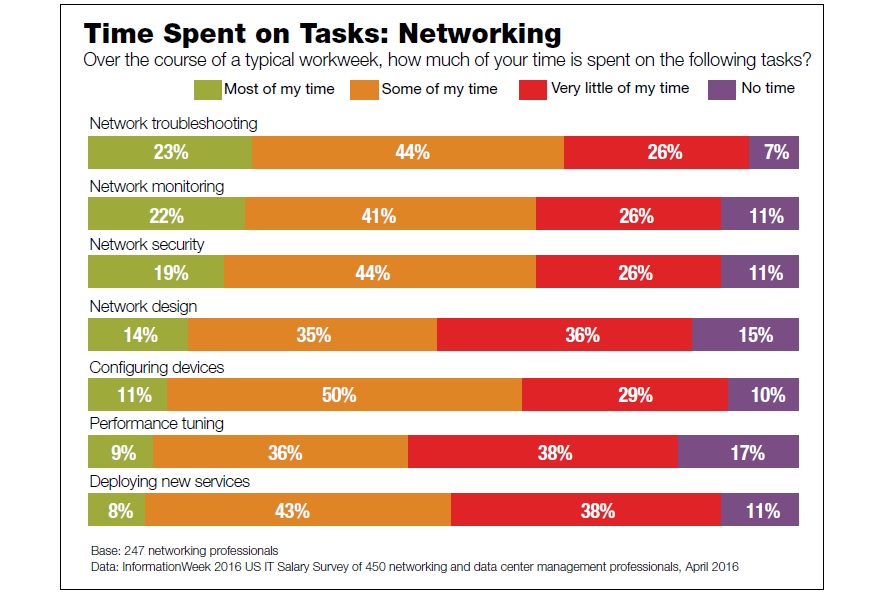 Those working in the data center gave more varying responses, perhaps due to the maturity of virtualization and an increased ability to manage workloads in that environment. Datacenter professionals reported spending the most time on systems management (chosen by 31%), troubleshooting (21%), and systems monitoring (20%). While datacenter managers specifically, also said they were devoting the most time to systems management, at 28%, they spend significant time on tasks at a more strategic level, including personnel management (26%) and planning new services (25%). 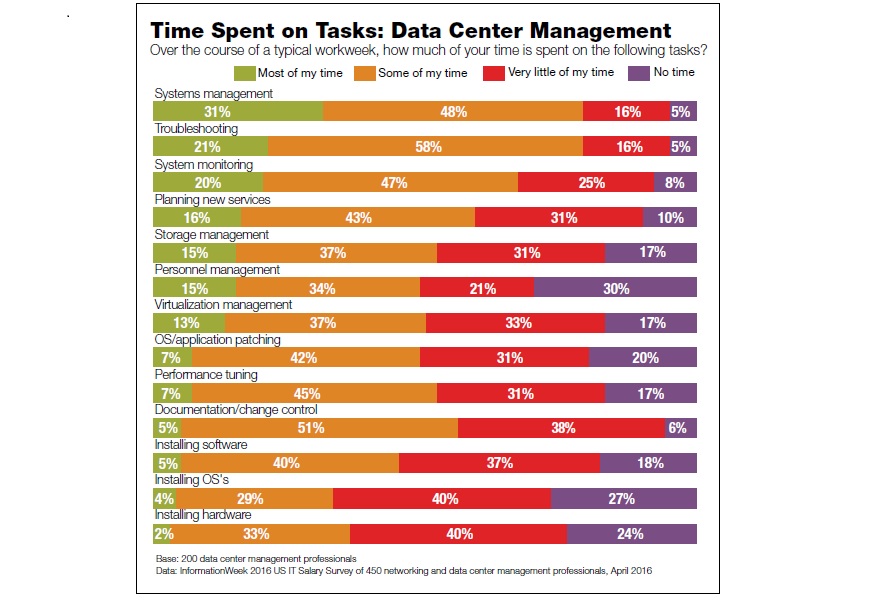 Even accounting for those small variations, IT pros responding to our survey are experiencing salary decreases across the board. Harris explained the dynamic he is witnessing: "Technology growth in areas like security, cloud, and converged infrastructures make the network admins and support techs of the past a commodity," he said. "There is an abundance of 'IT professionals' out there, but companies are discerning their skills and paying them accordingly. The key players are the people correlating with the business and designing the solutions — the architects and analysts. I feel like that's where the greater salaries are going."

Nancy Jones, a system administrator at Vectrus, agreed on the declining value of traditional IT roles. "The value of the seasoned veteran data center administrator seems to be decreasing," she said. She also noted that the aging IT population is causing "job creep" in which experienced employees are replaced with entry-level new hires or not replaced at all, their duties simply absorbed by the rest of the team.

In our survey, both staff and management titles reported an average of 20 years of IT experience. And many have quite a history with their companies. The amount of time at their current employer was a median of 9 years for staff and 11 years for managers. A large majority have worked for only one or two different companies in the past 10 years — 74% for staff and 83% for management.