The final keynote by Cisco's former CEO reeked of fire and brimstone. But do regular IT pros need to worry about an impending IT apocalypse?
Patrick Hubbard

It's a new day in enterprise technology, with Chuck Robbins at the helm of Cisco. But John Chambers left a lasting dark impression with the audience at Cisco Live in June. He essentially dropped a hand grenade, predicting the end of IT as we know it, and walked offstage.

Do you need to listen to him? Maybe not. But if he's right, half of all IT jobs may evaporate by 2025.

If you're ever in the South or Midwest and have a chance to go to a classic tent revival meeting, you should go -- it's even more interesting than Steve Martin's Leap of Faith. The goal is to build fervor with the audience, usually with a three-act oratory of commiseration; then fire, brimstone and damnation; and finally, salvation. Afterward, a basket is passed around. If the preacher has been successful, it comes back full.

The question in Chambers' case is: Was he just preaching to keep Cisco in the game as a vendor, or was he on a true IT healing crusade?

The network geek in me wants to believe that Chambers (and by extension Cisco) was really on a mission of mass education about this pregnant moment in IT technology, that technologists who follow them will find a promised land flowing with opportunity and automation, and that the Internet of Things is salvation, not a terrible plague. I've met Chambers a couple of times, and he's a passionate guy who says what needs to be said. Perhaps he's truly motivated by his departure from Cisco.

Previous Cisco Live keynotes have been heavy on the commiseration. Generally speaking, they went something like, "It's a terrible world of security, non-converged infrastructures, monitoring and management, virtualization support, storage bandwidth, etc." These presentations were interesting, but EnergyWise wasn't going to save anyone.

This year, however, Chambers brought fire. To paraphrase his speech and follow-up interviews:

It was all borderline sulfurous. 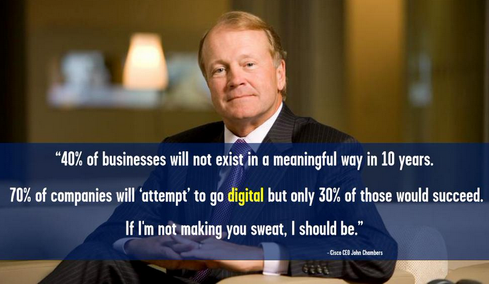 And as he laid out this potential reality -- walking in the audience as he always does, looking row-end attendees directly in the eyes up close -- it got really quiet in the unopened World of Solutions. You see, usually on the mornings of keynotes, the Cisco adjacent ecosystem is busy putting final touches on demos, practicing presentations and positioning swag. Some booth staff mill about, complaining about exhibitor pass limitations and asking where to find coffee. But this year they congregated around the large monitors at the Cisco studio to watch the feed of Chambers' speech.

He wasn't just talking to the event attendees about their companies and the consuming of technology; he was talking to all the vendors who help those customers manage their infrastructures. He was talking about nimbleness, device agnosticism, real security, more endpoints than can comfortably be imagined, and automation like nothing our industry has ever trusted. Four or five of the top players looked pretty surprised by the preacher in that tent, and leaned back in their folding chairs to fan themselves with virtual straw hats.

So then, the question for us in IT is, do we personally heed Chambers' sermon? Keep in mind that there is very real peril in committing. The most obvious change is to invest as heavily in skill development as we did when we began our careers in IT. But with the exception of the b-school crowd, nobody really likes hitting the books without good reason, especially if you have a career you love that's also bringing a bit of bank. We'll have to take time away from already limited time to learn about, and get ahead of, tech that's far from common and still speculative.

The lessons of networks and apps of yesteryear perhaps best inform us about the future. Rack and stack and punch-down datacenter jobs didn't disappear overnight -- most of those engineers learned UCS, VMware and remained in IT. And so a good number of IT reqs will still be needed, but with a sprinkling in of new specialist positions. And you can bet that someone will shortly list "Container Deployment Whisperer" on their LinkedIn profile, that is if it hasn't already happened.

Chambers closed his final keynote with a great slide from 15 years ago, and it looks like many I've built to get the attention of executives over the years. It was a classic eye chart with dozens of blue boxes representing technology elements that would all need to be connected to the Internet.

The difference between Chambers' slide and most of mine is that, for the most part, his predictions have come to pass. So, I'm hitting the books, setting up a next-gen lab and formally studying, not just figuring things out, for the first time in years. And it feels pretty good.